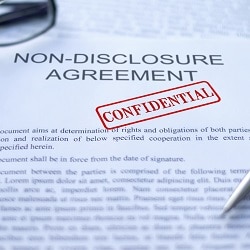 A new law ensuring that employees signing non-disclosure agreements (NDAs) receive independent legal advice will “increase the onus” on solicitors to act properly when drafting them, the government has said.

But it has held back from saying that employers must pay for that independent advice.

The government was responding to the House of Commons women and equalities select committee’s (WESC) report on the use of NDAs in discrimination cases, published in June, referencing also its consultation on confidentiality clauses, the outcome of which was announced in July and included the plan to ensure an employee receives independent legal advice before entering a settlement agreement.

The WESC argued that provisions that could “reasonably be regarded as potentially unenforceable” should be clearly understood to be a professional disciplinary offence for lawyers advising on such agreements.

The government responses highlighted the Solicitors Regulation Authority’s (SRA) enforcement action against solicitors over the misuse of NDAs.

“The SRA warning notice already states that they consider NDAs to be improperly used if they prevent a person from reporting misconduct, making a protected disclosure, reporting an offence or cooperating with criminal activity.

“The SRA has also committed to update its guidance to solicitors on the use of confidentiality clauses once our proposals are published, to align it with any legislative changes.

“Finally, the government will be legislating to ensure that an individual’s independent legal advice before entering a settlement agreement must cover the limitation of the NDA, which will also increase the onus on solicitors and significantly deter rogue practice.”

It reacted carefully to the WESC’s recommendation that employers should have to make a financial contribution sufficient to cover the costs of the independent advice.

“Employers do frequently pay for the independent legal advice received by an individual before a settlement agreement and we believe employers should contribute appropriately,” the response said.

“However, it would not be correct or feasible for the government to dictate the parameters of this payments as it may vary according to geographical location, case, legal availability and client requirements.”

The government argued against imposing its own standard forms of words in settlement agreements for individuals and businesses, but said it would be legislating to ensure that lawyers provided clarity on the details of agreements.

Instead of providing a “standard text”, the government said it had committed to producing guidance on the drafting requirements for NDAs.

The government also did not go as far as the WESC in endorsing calls for the Law Society to rewrite its guidance on NDAs, which has been strongly criticised. Initially the Law Society said it would not do so but quickly performed a u-turn.

The response said: “As an independent professional body, it is a matter for the Law Society what guidance it provides for its members. However, the government have highlighted the report’s recommendations to the Law Society.

“They have confirmed that they have already taken action on this issue, including publishing guidance to the public to detail their rights and dispel popular misconceptions, and will consider rewriting their practice note once the SRA has updated its guidance.”

The society’s public guidance also raised questions about its approach to the NDAs issue.

Meanwhile, the government rejected a proposal from the MPs that employers who repeatedly break the rules on NDAs should pay punitive damages, putting its faith instead in aggravated damages, ‘aggravated breach penalties’ and new legislation allowing employment tribunals to impose “tougher sanctions”, including increased costs.

Aggravated breach penalties happen when an employer’s breach of a worker’s rights has “one or more aggravating features”. The upper limit for these penalties was quadrupled from £5,000 to £20,000 in April this year.

The government said aggravated breach penalties were “punitive”, while aggravated damages were compensatory, which meant the amount awarded was subject to judicial discretion.

“The government believes it is also important to note that potential discrimination awards are uncapped, and so will vary depending on the facts of the case.

“In addition, tribunals typically make additional awards for ‘injury to feelings’ in discrimination cases, with levels of award depending on the seriousness of the employer’s behaviour.”

The government rejected the committee’s proposal to force all employers to investigate all discrimination and harassment complaints, and said it was considering whether the time limit for bringing cases should be extended from three to six months.

It noted the committee’s concerns on costs, which at tribunals are not automatically payable by the unsuccessful party but depend on the behaviour of parties during the proceedings.

“Employment tribunals are meant to be a more informal venue than the civil courts system and for this reason there is a different approach to costs.”

It also recognised that awareness of tribunal powers, including powers to award costs, was low, which was why it had recently published new guidance on the issue.