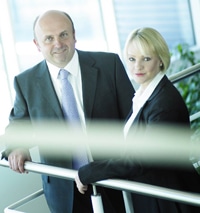 Walton and Danson: bringing experience from acting for insurers

A groundbreaking new law firm that handles personal injury claims for other practices on a white-label basis has launched in the north-east of England, Legal Futures can reveal.

Questus, which says it is the first dedicated outsourcing law firm of its type, promises to charge a fixed fee which will be less than it currently costs firms to run claims, and which will also be less than the fees under the RTA process – both now and in the future – or, when fixed fees arrive, for litigated claims.

This means that the balance firms recover above Questus’s fee will be pure profit, while firms will either be able to take on more cases or focus on other areas of work.

It is purely a business-to-business offering and so will only act on an outsourced basis for other law firms, and not directly for clients. It also offers an option for claims management companies to become alternative business structures without having to hire a whole legal team to handle the work.

The team behind Questus used to run the Stockton on Tees office of leading insurance law firm Berrymans Lace Mawer until the branch closed earlier this year. They handled claims, particularly motor, for major insurers. The directors are Tony Walton and Rosalind Danson.

Mr Walton said Questus benefits from being in a low-cost area of the country and its experience of working for insurers, which means it has a better grasp of efficiencies than many claimant practices. “Defendants insist that claims are handled to the highest standards but at the lowest fees. We think that the future of claimant lawyers looks a lot like our past experience… Once the fixed-fee culture spreads, people are going to be forced to think about outsourcing.”

While there are opportunities to outsource personal injury work abroad, he argued that firms would have more reassurance from dealing with an onshore, Solicitors Regulation Authority-regulated legal practice.

Mr Walton acknowledged that firms will be wary of having another practice operate with their brand and reputation, but said he was confident Questus could prove that it will maintain high standards.

He highlighted the firm’s close supervision of claims handlers, which he said was of a different order to most law firms – “handlers only handle and supervisors only supervise”. All Questus supervisors are highly experienced lawyers; they have no files of their own and sit with their teams, which have only four people in them. There are comprehensive audits and monthly management information.

Questus aims to be a volume operation and is building up its staffing levels.