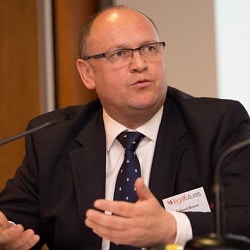 Brown: We’re not trying to be the cheapest

A new professional indemnity insurer is claiming to be the first to offer well-run law firms “direct financial rewards”.

Richard Brown, chairman of New Eden, said rewards could take the form of a full annual rebate of the premium in a firm’s fourth year if it remained claims-free.

“If you can prove the firm is well run, there is no good reason why premiums should increase just because a hardening market dictates that they should,” he said.

“If you run your business well and provide a good, profitable business to the underwriter, why would he not want to share some of it with you?

“There should be more of a partnership between insurer and insured, where they both share in the firm doing well.”

Mr Brown said he had seen a rewards-based approach applied to firms with “particularly bad claims experiences” which later improved, but never to good firms.

He said law firms which were not totally claims-free, but kept their claims within limits could benefit from a rebate worth part of the premium.

“We recognise that a firm cannot always be totally claims-free because they have customers who make allegations, but at the outset they should know what their goals and rewards are.”

Mr Brown said New Eden was backed by two A+ rated insurers, which he did not want to name.

He has worked in the PII sector for 30 years, specialising in work for law firms for 20 years in roles at the likes of brokers Prime Professions and Miller.

Mr Brown said that, rather than relying on law firms to complete a 30-page paper application, New Eden used questionnaires to obtain information from partners, solicitors and support staff and combined this with an online portal to help it assess risk and calculate premiums.

He said New Eden was more likely to rely on information from questionnaires than historic data when assessing premiums.

He said it was important to include support staff, who were often “at the front-line in taking enquiries”, as well as partners, finance directors and chief executives.

“We’re not trying to be the cheapest – you will pay the right premium but participate in the rewards,” Mr Brown said.

“Instead of offering cheap premiums just to buy in the business, we are offering a more sustainable model where firms prove themselves over time.”

He said the insurer wanted to move away from insuring firms based on type of work.

“There are good conveyancing firms which are very well run and risk averse and should not be put together with other ones,” he said. “It should be more about how they do the work and how they run the firm.”

He added that New Eden was particularly aimed at firms with one to 10 partners, paying premiums of £10,000 to £100,000, but was available to firms of all sizes.