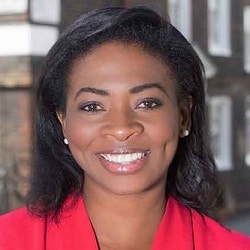 The Black Founders Hub [1] is the brainchild of Denise Nurse, the co-founder of Halebury, and Rashida Abdulai, founder of Strand Sahara, the online legal service for SMEs in the UK and across Africa, together with David McQueen, co-founder of leadership development company Q Squared.

They announced its creation at this week’s online Legal Geek conference, as it was at the 2018 event where they met.

Ms Nurse said it would launch properly at the start of next year with the aim of bringing about systemic change alongside the “tactical” changes within firms to address their own diversity issues.

The hub has three goals: to change the narrative – “let’s tell a new story about who a good lawyer is, what kind of skills they need, what they look like”; to “recast the visuals”, so that firms’ leadership looked different; and to create economic empowerment.

The solicitor – who, along with Janvi Patel, sold Halebury last year to Elevate [2] – said creating a climate for change in the legal world started at the top: “Those with the power, influence and money to make faster and significant change are in leadership and the leadership in the legal industry are not diverse…

“Waiting for [them] to make these changes on their own is just not happening fast enough and it is having a wider impact on society in terms of justice and equality.”

Ms Abdulai argued that the profession needed to embrace innovation: “Our profession faces a real challenge to stay relevant and to stay competitive and it all starts with strengthening our diversity… Innovation is a natural by-product of diversity.”

Mr McQueen said his work with law firms showed that a lack of diversity at law firms led to “a lot of group think, a lot of stagnation and poor iteration when people are trying to create new innovative products”.

“We recognise that progress is being made internally [at law and other professional services firms] but we want to create a blueprint and a model for individuals to come together to make more radical change.”

Ms Nurse told Legal Futures that encouraging businesses “to think big and scale could be quite powerful”, recalling how valuable she found networking with other female CEOs when she and Ms Patel were building Halebury.

The aim was to cover business-focused professional services, as there was a “similar story” to the law across all of them.