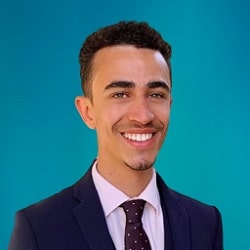 Two young paralegals have launched an unregulated legal contracts business which provides fixed-price services for mainly online businesses in the UK, the USA and Europe.

Nathan Ingram, managing director of Manchester-based The Contract Lawyer, said the work was carried out by self-employed paralegals and qualified lawyers – 10 of each in the UK and two of each in the USA.

His co-director is Beth Monk. The pair met while studying law at Lincoln University, graduating in 2016, and have both subsequently spent time working as paralegals.

Mr Ingram said that after he launched the firm’s website last week, there was an “immediate increase” in engagement via LinkedIn and business referrals, along with 20 new clients.

He said the majority were e-commerce businesses, many of them launching during the coronavirus crisis.

“It’s a good time to launch,” he said. “A lot of people on starting new businesses based on their passions, for example fashion e-commerce businesses.”

Mr Ingram said other online businesses were getting to ready to launch as the lockdown is relaxed, taking advantage of the desire to get outdoors, such as an app for anglers allowing them to book space by a river or pond.

Clients of The Contract Lawyer opt for a range of fixed-price contract services, from a single product for £75 to an ‘ultimate business package’ for £350, including website terms and conditions, along with other contracts and policies.

Mr Ingram said the contracts were written by paralegals, all of whom must have law degrees and at least five years’ experience as a paralegal, unless clients want a ‘premium’ service, in which case they were put in touch with solicitors for separate, bespoke rates.

Discounted rates are offered to ‘affiliates’, people working in website development and business support who refer work to The Contract Lawyer.

Mr Ingram said that since the firm was also doing work for companies “all over the US”, it had plans to open similar facilities in the USA later in the year, and also in Germany, where it has a partnership with a local paralegal.

Mr Ingram, who started work as a personal injury claims handler at the age of 18, became a full-time paralegal at Pilkington Shaw in Liverpool after university, and then became a client services manager at Glaisyers in Manchester.

Mr Ingram said he is going to sit his legal practice course exam online next week. He said he wanted to be a solicitor.

Ms Monk worked in Bolton, first at Keoghs and then Bond Turner, before setting up The Contract Lawyer.