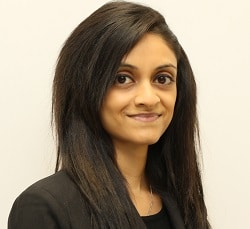 Patel: Collaboration will happen much more in the future

A new law firm regulated by the Bar Standards Board (BSB) aims to attract young barristers and solicitors interested in working together.

Black Antelope Law is made up of two barristers, both of whom work on a direct access basis, and two solicitors. The lawyers work partly from home and use the Regus network of offices in London.

Roshni Patel, solicitor and head of marketing, said the firm was the brainchild of Simao Paxi-Cato, called to the Bar in 2010, and Shaheen Mamun, a solicitor who previously worked for Mr Paxi-Cato as a litigation assistant.

Ms Patel said the firm took its final shape when she met Mr Paxi-Cato at a Law Society networking event in the autumn.

She said she was finding it hard to return to the law after taking a two-year break to look after her sick mother. Before that she qualified as a medical negligence and industrial disease specialist.

“When I applied to law firms, I told them I was interested in moving into private client work. The first thing they said is: ‘You’re not trained in this area of law. We would have to train you.’

“I offered to work as a paralegal while I was training, but they said that if they wanted a paralegal, they could take on a student.”

Ms Patel said the other problem she faced looking for jobs was that she needed to work flexibly to look after her mother.

“Why should it make a difference which hours we work and whether or not we work from home? A lot of law firms limit flexible working to their directors and partners.”

The firm offers a wide range of legal work including immigration, family, private client and crime, which is handled by Black Antelope’s newest recruit, Gavin Dingley, called to the Bar in 2015.

“There has always been a divide between barristers and solicitors,” Ms Patel said. “Clients get confused by it, and it is difficult to know what the true situation is if you are not in the profession yourself.

“We need to be much more transparent and accessible. Many people are becoming alienated from the justice system or relying on self-help. Having all the experts in one place makes it much easier for clients. They don’t have to go anywhere else.

“Collaboration will happen much more in the future. Many people have told us they are thinking of joining us because they like the idea of solicitors and barristers working together.

“Older barristers can be very resistant to change. Young barristers and solicitors are more willing to work together in a team.”

Ms Patel added that she believed the distinction between solicitors and barristers would, at some point in the future, be limited just to their names and if the process did end in one profession, it would be a good thing.