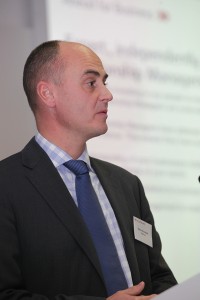 Profits were up last year and confidence is buoyant for the coming year among small and medium-sized law firms, according to a major benchmarking survey.

Confirming the results of last week’s report, which found smaller firms optimistic for the future, the latest Natwest financial benchmarking report found that nine out of 10 firms surveyed thought profits would increase during 2014.

The 2014 report analysed financial data from 380 firms with turnover of up to £25m. It concluded their finances were in much better shape than last year’s survey, which found profits flat-lining.

Firms were deemed to be small or large depending on whether their annual fees were under or over £1.5m. Some 67 firms had fee income of over £5m.

As last year, the survey found wide variations in the success of the best and least successful firms. Profit per equity partner (PEP) in the top 25% of performers was about 10 times that of those in the bottom 25%.

Profits were up 7% across the board compared to last year; up by 15% at smaller firms and 3% at large firms. While the overwhelming majority of firms anticipated profits would rise, fewer than a fifth believed the rate of increase would top 10%.

Author Robert Mowbray, an accountant well known for advising law firms, concluded that the profit figures showed how “five difficult years have not killed off the legal profession. The reality is that the profession continued to generate profit levels that were just below the traditional norms”.

Gearing across the surveyed firms was 2.88, meaning each equity partner was managing 1.88 fee earners. “This figure will need to increase for more routine work, as clients will not pay a partner rate for such work,” Mr Mowbray said.

He observed that an average of 1,000 chargeable hours per fee-earner suggested “some under-recording of work”. He explained: “Full time capture is the most basic thing that fee-earners are required to do but most massively under-record their working time.”

Fees increased on average by 3%, which was roughly in line with inflation, but the smaller the firm, the smaller the increase. Median fees per fee-earner was £136,000, although regionally they were very different: at £176,000 in London, they were 56% higher than Scotland.

More than nine out of 10 firms thought fees would either hold level or increase during 2014. The author said: “For many legal businesses, now is the time to focus more on the growth of fee income to increase profits.”

Larger firms showed they had more trouble managing lock-up than smaller firms. The median was 107 days but for small firms it was 89 days, compared with 138 days at the largest firms. Meanwhile, just 30% of firms expected work-in-progress to be reduced in 2014 and a similar proportion had confidence that debtor days would be reduced. Pessimism about cash flow improvement was more marked at smaller firms than larger firms.

When it came to finance, firms had an average of £20,000 in the bank, which “suggests that most can afford to invest as the economic growth takes hold”. Partner capital ranged from 40% of annual fees down to 15% and more than six firms in 10 expected this would improve during 2014.

Cash for investment would become increasingly important, Mr Mowbray suggested. Investment was part of a “change in mindset” that firms had to undergo as the economy began to grow. “For firms that have spent the last five years believing that in order to make more money they need to spend less, it may now be difficult to believe they may need to spend more to make more.”

He also warned of a “real danger” that some firms will start to relax when their earnings begin to increase again. “Even if work volumes pick up, it seems likely that pricing pressures will continue and therefore they will need to continue to think about and invest in greater efficiencies in their working practices.”

Steve Arundale, head of professional sectors at Natwest Commercial Banking, said: “As Britain slowly pulls clear of what has been a long and challenging recession, lawyers appear to be sharing the optimism.”

But the optimism should be balanced against caution when it came to cash management, he said, pointing out that in 2013 a number of firms had failed because they ran out of cash: “Lawyers continue to struggle to understand the relationship between profit and cash, given that a firm is unlikely to improve its bank balance by growing revenue and profit if it fails to improve lock-up days and potentially runs the risk of over-trading.

“To avoid this problem, firms must pay special attention to their cash flow forecasts and they should engage their bank regarding any future funding requirements.”

The full report can be downloaded here.