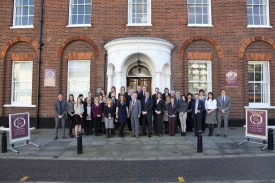 The debate over national versus local legal brands is set to begin again after Norfolk firm Clapham & Collinge announced it was “reclaiming its independence” by leaving the QualitySolicitors network after four years.

The firm, which has offices in Norwich and Sheringham and employs more than 50 people, offers a typical range of private client and business services. “An elegant plum and pistachio brand-mark… has replaced the bright pink QualitySolicitors logo,” it said.

Senior partner Hugh Berridge said: “Becoming part of a large, national network was absolutely the right decision for us four years ago. At that time changes in legislation were making it incredibly hard for smaller law firms to compete against commodity legal providers such as the large supermarket chains. We were determined to put ourselves in the best possible position to retain our market share and grow as a business.

“There was a good fit between Clapham & Collinge and QualitySolicitors and we were able to learn from each other and create a customer-focused brand that is now well-known across the UK.

“We have enjoyed, and benefited from, being part of QualitySolicitors but, after a great deal of deliberation, the Clapham & Collinge partners decided that the time was right to start re-focusing on our own brand. We have always been incredibly proud to be a Norfolk firm and, as we develop the business, the county is where our commitment lays.”

QualitySolicitors showcased Clapham & Collinge at its member firm conference in 2013 to highlight its work in the local community. As well as supporting charities such as Break, Will-Aid and the Norfolk Wildlife Trust, the firm promotes its own events such as regular free advice coffee mornings, dementia awareness events and training sessions.

Mr Berridge added: “The move away from being part of a national network means that we can revert to making business decisions that are entirely focused on the needs of our business, our clients and our community.”