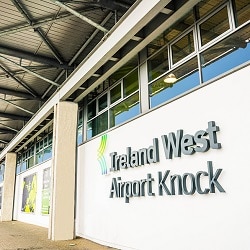 National chambers Clerksroom has recruited two barristers based in County Mayo, Ireland, as part of its Brexit preparations.

Raoul Downey and Caroline Langley, both experienced commercial barristers who live not far from Knock Airport, joined Clerksroom this month.

Stephen Ward, managing director of Clerksroom, said: “We have decided to establish a presence in Knock with Raoul and Caroline before the Brexit deadline as we anticipate there being a large number of clients with questions about how Brexit will affect family, children, money and business contracts cross borders.”

He said a further attraction of Ireland was the possibility of co-locating the company’s servers there.

Mr Downey said: “A lot of UK businesses are nervous about what might happen in March and are making plans to relocate, and the obvious place to move is Ireland.

“They may want to continue to operate in the UK, but move their HQ to Ireland. A lot of Irish business clients also have interests in the UK.”

He said Knock Airport, with its five flights a day to London and cheap flights to Bristol, near the Clerksroom HQ in Taunton, was key to “making the whole thing work”.

Mr Downey, who specialises in commercial and employment law, said: “My expertise is an English barrister. I want to work in conjunction with Irish lawyers. I’m not pretending to be an expert in Irish law.

“We’re not trying to muscle in on the Irish legal market, we’re trying to support it. My focus will remain UK-based, even if the work is coming from Ireland.

“How big the market is I don’t know, but the potential is there and we want to get in early. That’s why we’re here.”

Mr Downey said he had no immediate plans to join the Irish Bar. Having grown up in Hong Kong, he practised in London for nearly 25 years before helping his partner run her private nursery business for five years.

Her decision to buy a house in Ireland prompted his move to the village of Murrisk on the coast of County Mayo.

“Living away from the hustle and bustle of London is much more conducive to your work/life balance,” he said.

Caroline Langley grew up in Japan and qualified as a barrister in England before working in Hong Kong and the USA, and then moving to Ireland and joining the Irish Bar.

“I believe Ireland has a lot to gain from Brexit, and believe it will be the first place people will come to find answers,” she said.

Ms Langley, who has a mixed commercial and family law practice, said one tranche of work would come from companies looking to set up in Ireland.

“I don’t think Brexit will mean the end of the UK, but the timeline is not satisfactory. It’s like divorcing 27 wives when there are many complicated issues at stake.”

Ms Langley said she had spent six months at the European Court of Justice in Luxembourg earlier this year, in the chambers of an advocate-general. “It’s hard to advise people unless you understand where we’re coming from.”