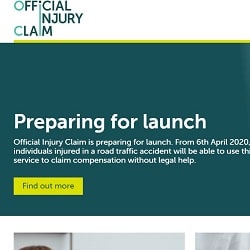 The name for the new whiplash portal was released yesterday as registration formally opened, amid warnings from insurance lawyers that motor fraud is moving into other areas.

Claimant representative and compensator organisations can register on the portal’s new website – Official Injury Claim – ahead of what is stated to be its launch on 6 April.

As the portal is run independently of government – while fulfilling government policy – the website has a .org address rather than .gov. It is funded by the insurance industry.

The site describes Official Injury Claim as “a new service that makes the personal injury claim process simple, secure and unbiased so anyone can choose to make a claim without the requirement of legal assistance”.

As we reported last week, the April launch remains the Ministry of Justice’s stated aim, despite serious misgivings from lawyers on all sides that, with the rules and various policy decisions still outstanding, there is not enough time for them to prepare.

Dominic Clayden, chief executive of Motor Insurers’ Bureau – which is building the portal for the ministry – said: “The launch is a significant milestone for the successful delivery of the new service to support the whiplash reforms set by the Ministry of Justice.

“By opening up the registration window today we are able to give organisations the chance to choose a registration time that best suits them in the coming weeks. There is still much to do ahead of launch but from an MIB perspective, work on the build has gone well and overall delivery is in good shape.

“The website you can see today will be updated at launch to put consumers centre stage – and support and guide them simply and quickly through the new process.

“This is a service built with consumers at its heart and shaped with their input. The second round of testing amongst consumers is currently underway and we will publish high level results in the coming weeks.”

Meanwhile, Damian Rourke, a partner at City law firm Clyde & Co, said that in light of the upcoming whiplash reforms, it was “imperative that hard-learned lessons” on dealing with fraud in motor claims be translated “with urgency” to other casualty insurance lines.

Writing in his firm’s insurance predictions for 2020, he said: “We have seen already examples of organised fraudsters moving into other areas to test systems, processes, checks and balances of other insurance lines…

“While there have been numerous discussions in the industry regarding claims inflation and damages shift for several years now, little hard data has been gathered about how these are manifesting in claims lines outside motor.

“In order to fight these issues, we expect that insurers and defendant representatives will move away from the traditional anecdotal evidence method of addressing these concerns toward a more data-driven approach.”

A similar report predicting the year ahead for the insurance industry, this time from City firm Kennedys, said: “The fabrication or exaggeration of claims (claims farming) is regrettably something that appears to be on the arise and not just in the personal injury industry.

“We have now moved away from PPI and holiday sickness, but the latest trends appear to be cavity wall insulation and loan commissions.”