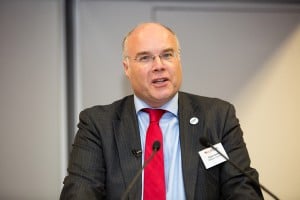 The chief executive of what he termed a “bog standard law firm” has described how it secured private equity investment as a “roll-out specialist”.

In an amusing and frank address to the Legal Futures Annual Innovation Conference earlier this week, Colum Smith, CEO of McMillan Williams, revealed that his firm got eight private equity funding offers before agreeing its £5m deal with the Business Growth Fund (BGF) earlier this year.

He said that, far from being seen as a disadvantage by investors, the fact McMillan Williams did legal aid work was seen as “great” in that it had government contracts, which were paid on time.

“If the profit margins are slim, that’s made up by the fact you don’t have to chase any debt and it’s good for cash flow. They’re very pro legal aid.”

McMillan Williams, the first high street firm to obtain external investment, has expanded from five to 20 offices since 1995.

“We’re a bog standard law firm,” Mr Smith said. “What we want to do is serve the local community, doing fairly local work – the mainstay of the high street.

“We’ve been asked to do it on a scale basis. Why did that happen? Was there some master plan? Did we all change because the ABSs came along? All that happened was we went to the banks and said ‘could we have some more money?’, and they said ‘no’.”

Admitting he had not known much about how it worked before beginning the process, Mr Smith said private equity “moves in packs” and if you get one offer, the others “come in like dominoes”. He explained that this was presumably because investors could write in their reports that if they invested in a business which fails, others would have made the same mistake.

Mr Smith said he had offers for majority and minority stakes, but he preferred minority. “Why? I had no real idea, but being a typical solicitor I liked to keep control.”

Looking back on how McMillan Williams obtained external funding, Mr Smith said the firm should have converted from a partnership to a limited company and only then, after a year or two, looked for outside investment. Instead he said the firm did it all at the same time.

The chief executive commented on his relationship with BGF: “Unless I’m doing something fundamentally wrong, they leave me alone. They come to the board meetings.

“Now we have a written plan which has milestones and goal posts. Go off them by a millimetre and they’ve all over you. Why? Because they can justify that.

“I call ‘off plan’ taking the opportunities that come my way in an entrepreneurial manner. They say ‘off plan’ is doing something they think I shouldn’t be doing.

“If you want the discussion to be meaningful, you have to stick to the plan. Changing the plan is like moving an ocean liner.”

Mr Smith said he did exactly the same as he did before the new funding, but “at a different level”.

He went on: “I stopped looking at the figures, because they’re too frightening. Once you go past millions of this, it becomes academic. Either you’re going to make money or go bust. Private equity doesn’t like the idea of going bust, so they have something called a cash reserve.

“Why did private equity invest in us? We can open offices rapidly and we have an automated system. Apparently that makes us a roll-out specialist. So they invested in us not because we’re any good at law, but because we can roll out lots of offices.

Mr Smith added that he disliked taking over law firms, which were “full of baggage” and it was “much better to come in clean” by opening an office.

He said he would only take over a law firm if he could not get hold of the site he wanted. He said most of the businesses he had bought were to get premises, and the lawyers “come along for the ride”.

Asked how he decided which firms to buy, Mr Smith replied that the firm had a “formula”, with a points-based system which was “quite complicated” and required a lot of data being fed into a model. Mr Smith said he did not understand the model but he did set the number of points.