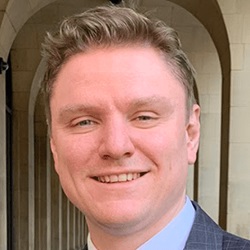 Jones: Demand for WRS’s services will only increase

Wealth Recovery Solicitors (WRS) is a Bar Standards Board-regulated law firm that opened less than a year ago.

David Jones, executive partner at Glaisyers ETL – the Manchester and London firm that was ETL’s bridgehead into the legal market – has joined the board of WRS, which is relocating to the former’s offices.

WRS traces and recovers money lost to crypto schemes using software which is also deployed by the FBI, banks and governments. It also helps investors who have fallen victim to conventional trading scams.

The firm was set up in March 2021 by solicitor Josh Chinn and operations director Richard Irving, who also runs a property development and management business.

Its seven-strong team has so far recovered more than £2m on behalf of individuals who had lost money as a result of negligent or fraudulent investment schemes.

ETL generally takes a majority stake in its network firms and already has 16 accountancy practices across England and Wales on its books. In 2018, Glaisyers was its first legal acquisition here and last year it added London firm Laytons.

Mr Chinn said: “Taking on this investment from Glaisyers ETL is about far more than just a capital injection.

“Establishing a close corporate relationship with a firm with Glaisyers ETL’s reputation, history and scale means we will have access to the infrastructure and legal firepower we will need to cope with the rapid growth we are already experiencing, and which we can now accelerate.

“The demand for our services is huge, and I believe that what we are currently seeing is just the tip of the iceberg. There are vast numbers of people out there who currently believe their money has been lost forever, but who could be helped if they knew about our capabilities

Mr Jones added: “In a short time, WRS have established themselves as the leading firm in their field… Sadly I can only see demand for their services increasing in the years ahead.”

DMH managing partner Richard Pollins said: “Our combined offering to high net-worth clients is now unparalleled in Sussex… It is also another important milestone in our broader expansion plans for the coming years as we continue to grow.”

It is DMH Stallard’s fifth merger with Griffith Smith since 2015 and is expected to complete on 31 March.

Also this week, Royds Withy King and Goodman Derrick confirmed that they would merge on 1 May to create a firm with around 360 lawyers, of whom a third will be based in the former’s London office, with Goodman Derrick’s office closing.

The rest will be in Royds’ seven offices across the South-West and Thames Valley.

Graham Street, Royds Withy King’s managing partner, said: “This merger is a significant step forward for both firms. For Royds Withy King it strengthens our position as a top 100 UK practice enhancing and significantly extending the breadth and depth of expertise and specialist services available to clients, particularly in the areas of corporate and real estate.”

In Kent, Manak Solicitors has acquired Sevenoaks firm Walker & Walker, whose founding partners, Brian and Marlene Walker, and eight other staff are moving over. Manak now has 45 staff in three offices in Kent and one in London.

Marlene Walker said: “We can see the investment that Manak are making in their internal systems and client-facing technology- they are relentlessly trying to improve client experience.”

Earlier this month, Weightmans and RadcliffesLeBrasseur announced they were in formal contract negotiations ahead of a merger at the end of March

They said the combined firm would create “a leading UK practice in healthcare in particular and increase the market presence of both firms in London”. The merged firm would have 225 partners and a total headcount of over 1,400 people. It would be known as Weightmans.

Finally, Manchester personal injury firm Express Solicitors has signed an £8m revolving credit agreement with the Royal Bank of Scotland, which it said would “help finance a strategy based on both organic and acquisition-based expansion, as well as make funds available for increased marketing spend and the recruitment of more employees from graduates to partners”.

Research published earlier this week by Acquira Professional Services found that half of law firms were considering mergers and acquisitions.