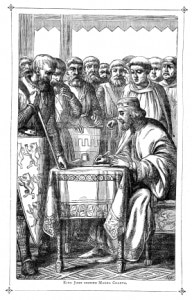 Magna Carta: “declining commitment” of UK and Australia to rule of law concepts

Mr Justice Mostyn has delivered some of the strongest judicial criticisms yet of the legal aid cuts and warned that “more are in prospect” under a majority Conservative government.

His speech in Australia earlier this month on the Magna Carta and access to justice in family proceedings was published two days before criminal law solicitors start a strike today over further cuts to their pay.

It also comes as senior judges are drawing up guidelines on what judges should and should not say about government policy and planned legislation.

Mostyn J said it was inevitable, after the financial crash of 2008, that the coalition government would impose “serious curbs” on the legal aid scheme.

“What no-one anticipated was the savagery of the cuts, with private family law proceedings, save in certain very limited circumstances, being taken out of scope altogether.”

He went on: “Even allowing for the need to make cuts in order to reduce the fiscal deficit I do not accept that in the critically important area of private family law it has been necessary to sacrifice individual justice on the altar of the public debt, at least not to the extent that has happened.

“It is not clear to me why this particular pillar of the welfare state has had to fall.”

Mostyn J said the prediction of the Legal Action Group, that the cuts would lead to ‘an underclass of people disenfranchised from civil justice and indifferent to the rule of law’ was “slowly but surely” being fulfilled.

“Is this the legacy that we wish to leave future generations? Sadly it looks as though that will be so, and there will be no respite from further cuts.

“Apart from the Greens no party included a reversal or mitigation of the legal aid cuts in its election manifesto.

“The unexpected victory and attainment of an absolute majority by the Conservatives on 7 May 2015 surely means that there is no prospect of reversal of these cuts, and that more are in prospect.”

Mostyn J concluded that the “declining commitment of governments” in both the UK and Australia to “genuine equality before the law and to the cluster of rule of law concepts – of which Magna Carta forms a significant part – should put a brake on meretricious rhetoric and produce calls for fidelity to the ideals which they both claim”.

Earlier in the speech, he argued that the sweeping away “at a stroke” of 63 years of state funding of private family law cases, had “flooded” the courts with litigants in person.

Referring to his own rulings and comments on the “gross unfairness meted out to a parent in private law proceedings by the denial of legal aid”, Mostyn J then referred to the overturning, on appeal, of the High Court’s ruling in Re K & H, that the court could award legal representation to an accused father from its own budget.

Mostyn J noted that the Master of the Rolls, Lord Dyson, who gave the leading judgment at the Court of Appeal, held that it was “perfectly acceptable for a judge to act as cross-examiner” where a party was unrepresented.

However, Mostyn J said that in complex cases, Lord Dyson had suggested that new legislation was needed to remedy the problem.

The judge added: “He left tantalisingly open the position were legislation not to be passed and such complexities to arise in a future case (as they surely will).”