More funding for platform that “lets lawyers express themselves visually” 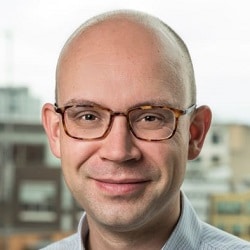 Follett: A lot of the language used by lawyers is quite visual

A start-up created by an ex-City lawyer to help lawyers and clients visualise complex legal structures and transactions is in a new funding round having already raised £2m.

Tim Follett, its founder and chief executive, said a lot of lawyers were “visual”, but until now had lacked the means to communicate their visual side.

“A lot of the language used by lawyers is quite visual, such as a waterfall of payments or an equity ratchet. These are visual metaphors suited to diagrammatic representation.

“When you talk to people about deals, you can see they have an image in their mind’s eye. It has been very difficult until now to take that image and map it into something that can be used and shared with other people.”

Mr Follett qualified at and worked for Slaughter and May before moving to Farrer & Co and setting up StructureFlow in 2017.

He said the software had been piloted by Norton Rose Fulbright and by Slaughter and May – a pilot which was continuing.

Mr Follett said he had always been “quite a visual person” and in his personal practice had always relied on diagrams.

“I saw that the ability to tell a story in a legal context is frustrated by the lack of software to do it.”

He said traditional methods of showing diagrams, such as whiteboards and PowerPoint took “a huge amount of time and effort” to deliver.

“At the heart of projects there is a corporate and legal structure. StructureFlow allows users to be able to understand it, visualise it and change it.”

Three other major law firms, which he did not want to name, are using it too.

“We want to get as many law firms on board as we can. There is the potential here to create a common platform for visualising deals. We’re at the start of that journey.”

Mr Follett said StructureFlow was in the middle of its third funding round, having raised £1.8m so far, mainly from angel investors. Innovate UK had also provided funding of £130,000.

The start-up has a team of six in London and one in Singapore. Mr Follett said it had looked “east rather than west” and “had not done much in the US”.

StructureFlow was talking to a number of law firms in Singapore and Australia, and Asian investors had a “real appetite to invest in new technology”. The US in contrast had a “historic cautiousness” about cloud-based products like this.

In order to use live data and work with law firms, Mr Follett said the company obtained ISO 27001 last year.

He said the start-up charged lawyers, whether in private practice or in-house, on a subscription basis, with reduced prices for larger numbers of subscribers.

Mr Follett added that many in the legal and financial sectors had been “slow to innovate and embrace visual technology” but it had “never been more important to get across complex information in a visual way”.

Four other companies are in the fourth cohort joining Fuse: