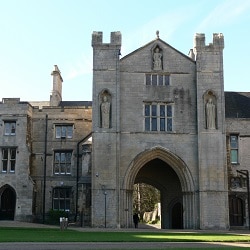 Middlesbrough Town Hall, the Knights’ Chamber within the grounds of Peterborough Cathedral, and the Ministry of Justice’s (MoJ) headquarters in London are among the venues of the first ‘Nightingale courts’, the government announced yesterday.

The first 10 temporary courts have been named as part of efforts to tackle the growing backlog of cases, although only one – in East Pallant House, Chichester – will begin hearing cases this week.

The MoJ said all of them would be up and running in August, as it worked to identify more locations.

The new courts are not able to deal with custodial jury trials because of the need for cells and secure dock facilities.

The MoJ’s headquarters at 102 Petty France in central London will accommodate family cases, while two of the sites are former court buildings – in Telford and Fleetwood – which are being reopened to handle civil and/or family cases.

Lord Chancellor Robert Buckland said: “Together with the judiciary, courts staff and legal sector, I am determined that we must pursue every available option to ensure our courts recover as quickly as possible.”

Some 54 Crown Courts will be hearing jury trials this week and almost all courts are now open to the public again – with over 300 operating this week.