MoJ on whiplash portal: “We must not rush it” 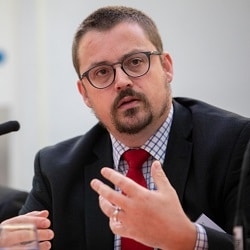 The Ministry of Justice (MoJ) official heading whiplash reform programme has maintained that April 2020 remains the goal, but said minister Lord Keen wants “to get this right and not rush it”.

While admitting there was a risk that implementation might be delayed, Richard Hutchinson rejected suggestions that the MoJ’s language on April 2020 was softening, as some on both sides of the divide have suggested.

He told this week’s PI Futures conference in Manchester that “the aim is April 2020 until it isn’t”.

He said that, if results from testing of the new portal for litigants in person bringing RTA claims of up to £5,000 were not good enough, he would ask the minister to explain what he meant by not rushing.

Mr Hutchinson said it was “absolutely imperative” to get the IT systems and contact centre right for the portal, being created by the Motor Insurers’ Bureau (MIB) and funded by the insurance industry.

He said access to justice was “at the heart of the system” and being built into the guidance currently being drafted for the new regime.

However, when asked if there was a risk to the date to the date, he replied “yes”, because things could change and “unexpected things occur” and, without referring to the expected general election, added: “I’ll leave you to think what these might be”.

Mr Hutchinson said the new rules and pre-action protocol had yet to be signed off by the rule committee and would likely be published in January.

A decision on how to deal with alternative dispute resolution in the portal would be made “relatively shortly”, while the MoJ was reviewing whether the damages tariffs laid out previously needed to be updated.

There would be detailed management information from the portal published, and this would quickly show up unexpected behaviours, the civil servant explained.

Addressing the fear that insurers may bulk deny liability, he said it would not be in their commercial interests to do so as they wold have to reserve against such claims.

But Mr Hutchinson did not have a clear answer to the question of what would happen to children – though excluded from the higher small claims limit – where they had an injury of less than nine months’ duration, which under the new tariff (from which they are not excluded) will mean damages of less than £1,000 and so caught by the current limit.

Jonathan Scarsbrook, member of the Association of Personal Injury Lawyers national executive committee, who was on the session panel, said this could leave children without access to representation.

Mr Hutchinson added that the system would provide clear help for litigants in person on valuing their claims, but that there would be no connection with the existing MoJ portal if their claims had to move to it.

Earlier Anna Fleming, chief operating officer of the MIB, said it would shortly be releasing the name and brand of the new portal.

She said the testing process, which until now has focused on the IT, would move to focus groups with a range of potential users from disadvantaged people with language difficulties to legal professionals.

There was no “absolute guarantee” that the whiplash reforms would be implemented on time, she acknowledged, but “ultimately the no-go decision” lay with the MoJ.

Ms Fleming said she would know by the end of the testing, in early 2020, whether the new portal was good enough to be launched in April.

“We can’t go out there with something we don’t think is good enough,” she stressed, adding that the MIB would not be afraid to tell the MoJ this.

Ms Fleming also confirmed that the contact centre – which will assist litigants in person – would have more staff than the 11 the MIB had previously suggested there would be.

She said the MIB would “go heavy” on staffing in the early days as it measured the level of demand, adding that “money is not the issue here” – the insurers paying for the portal were not questioning the cost.

One new nugget of detail was that the new portal will be able to deal with claims where this is more than one insurer.

Asked whether he thought the reforms would happen in April 2020, Mr Scarsbrook said he believed by a 60/40 margin that they would not.

Paul Nicholls, chairman of the Motor Accident Solicitors Society, also said he thought the reforms would be delayed, and warned of “chaos” if they were not.

Matthew Maxwell Scott, executive director of the Association of Consumer Support Organisations, agreed. Earlier he said: “It’s like Brexit. You shouldn’t set an artificial deadline until you know what you’re delivering.”