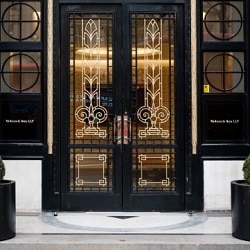 Mishcon de Reya has won an appeal over a judge’s refusal to grant the London law firm summary judgment on more than £150,000 of fees payable under a guarantee.

Mr Justice Johnson ruled that His Honour Judge Monty QC had been wrong to refuse summary judgment on the ground that Mishcon had not adduced in evidence the executed counterpart of the guarantee.

The firm acted for the defendants in a claim for libel and harassment that involved the internal politics of Kazakhstan. The claimant was awarded damages of £80,000 in 2017.

The defendants were introduced to Mishcon by Arcanum Global Inc, which Johnson J said was described as “a global intelligence firm” and said to be a subsidiary of RJI (Middle East) Ltd.

Johnson J recorded that, as the trial approached, Mishcon became concerned about payment of its fees and so RJI offered to underwrite £800,000 of them. Mishcon provided a deed it called a standard form guarantee to be executed both by RJI and the firm.

The key clauses were:

Last November, HHJ Monty QC refused the firm’s summary judgment application on the basis that Mishcon had not provided the executed counterpart of the guarantee executed.

He ruled: “Clauses 8.7 and 8.8 indicate that enforceability is contingent upon mutual execution and delivery. Without that evidence, the application… for summary judgment fails.”

Mishcon appealed, although it accepted another of the judge’s decisions that, at best, the claim could only succeed to the extent of about a third of the amount claimed.

“The natural language of the clause therefore strongly suggests that it does not amount to a condition.”

He continued that the guarantee made “business and commercial sense” without interpreting the clauses as imposing a condition of execution.

He accepted Mishcon’s argument that clause 8.7 had the effect that each counterpart was to be treated as an original, “to avoid any potential argument arising out of the fact that the parties did not sign the same document”.

It followed that RJI’s unpleaded defence that the guarantee was unenforceable had no real prospect of success. “There is no other compelling reason why the case should be disposed of at trial. I therefore allow the appeal and grant summary judgment.”