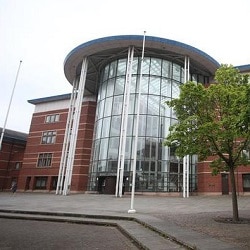 Nottingham Magistrates Court: Solicitor was talking to colleagues in courtroom

A veteran solicitor who made an “inappropriate and offensive remark” while trying to pay a compliment has been fined by the Solicitors Regulation Authority (SRA).

Richard John Hetherington, 69, has agreed to pay £2,000, the most the SRA can fine a solicitor without referring them to a disciplinary tribunal.

According to a regulatory settlement agreement published yesterday, Mr Hetherington – who qualified in 1974 – was at Nottingham Magistrates’ Court in November 2017 to represent a client at a hearing.

He was having an “informal conversation” with colleagues in an otherwise empty courtroom when he made “an inappropriate and offensive remark during an attempt to express a compliment in relation to a firm of solicitors”.

The agreement went on: “The compliment was meant innocently and genuinely but was misguided. The remark made reference to the ethnicity of members of the firm in question.”

Mr Hetherington admitted that, in breach of the SRA principles, he failed to act with integrity, to behave in a way which maintains the trust the public places in him and in the provision of legal services, and to carry out his role in a way that encourages equality of opportunity and respect for diversity.

It said the solicitor, “recognising that his conduct was unacceptable”, voluntarily attended a course on equality and diversity.

“Consequently, he now has a better understanding of words and conduct which may be inappropriate.”

He also said this was “an isolated and atypical lapse in behaviour which would not be repeated in the future”.

Meanwhile, the SRA overturned its decision to refer another senior solicitor to a tribunal after reaching a settlement agreement with him.

Stephen Goldberg, admitted in 1970, was a partner at North London firm OGR Stock Denton when he allowed an individual property developer client, and people and companies associated with them, to use the firm’s client account as a banking facility in relation to three payments where there was no underlying transaction or legal service being provided.

Further, while acting for the same client, he created ledgers which did not accurately identify the individual or company for which the firm was acting.

Instead, they used the generic trading name of the group associated with the client, albeit each transaction had a separate file and ledger and could be identified by reference to the property to which it related, and Mr Goldberg was satisfied as to the identity of the individuals and companies concerned.

This was a failure to maintain proper accounting records.

Also yesterday, the SRA has banned from the profession the non-solicitor former manager of the criminal department at Bird & Co Solicitors in Grantham, Lincolnshire after she was convicted of intentionally encouraging or assisting the commission of an offence, namely the possession of a mobile phone while in prison.

Lindsey Whotton was handed a sentence of five months’ imprisonment, suspended for a year, 120 hours of unpaid work, forfeiture of the mobile phone and a victim surcharge of £80.

Under section 43 of the Solicitors Act 1974, no firm can employ her without the SRA’s approval.

The regulator has also made a section 43 order against Alan Bates, who was a litigation fee-earner at Merseyside firm Scott Rees & Co.

It said Mr Bates backdated a letter that gave the impression he had served two witness statements on the defendant by the deadline set by the court when he had not. The SRA found his conduct to be dishonest.

Another section 43 order has been made against Laurna Porter, who between 2004 and 2015 was employed as a probate fee-earner by Dewes, and its predecessor practice Dewes Sketchley, in Tamworth, Staffordshire, and then went on to work at Glaisyers in the town as head of the probate department before her dismissal in March 2018.

The SRA said: “During her employment with the above firms it was found that she misappropriated at least £133,187.25 of client money from four probate matters. A finding of dishonesty was also made against Mrs Porter.”

Finally, Laura Evette Renwick, who was the assistant cashier at Keoghs Nicholls Lindsell & Harris in Altrincham, Cheshire, was found to have withdrawn £3,500 from the firm’s petty cash account without authorisation and to have made false entries on the ledger to conceal it.

As the firm is an alternative business structure (ABS), the SRA has banned her from working in other ABSs, under section 99 of the Legal Services Act 2007, and fined her £2,625.

In sharp contrast with its powers over those at traditional law firms, the SRA can fine employees of ABSs up to £50m.