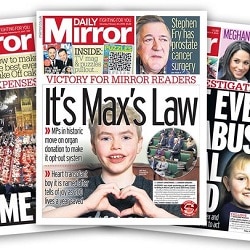 The High Court has rejected a bid to strike out the claim by various public figures that the legal department of MGN Group knew about phone hacking at the Daily Mirror.

Though Mr Justice Mann acknowledged that much of the department’s work would be privileged, he said this did not prevent claimants trying to prove that it knew what was going on.

The latest judgment in this long-running litigation represented a “large-scale” attack on a very significant part of the claimants’ cases, the judge observed.

“In it, the defendant in effect seeks to strike out the entirety of certain parts of what is called the generic case of the claimants and that part of their case which seeks to bring home knowledge of the existence of phone hacking and other unauthorised information gathering to board members and members of the legal department.”

Given that the claimants will be making very similar cases, a generic pleading has been drafted. New parts of it detail incidents where the claimants argue there was a “background of unlawful information gathering” and that the circumstances were such that the legal department, and thence the board, were likely to have known about it.

Mann J said MGN was “basically right” about the privileged nature of the communications and much of the activities of the legal department.

“However, it does not follow that the claimants cannot seek to rely on the presence of knowledge in the legal department and the board, where relevant, as a fact which it seeks to prove in the case.

“By and large privilege will create a formidable obstacle to trying to prove it, because the communications (and resulting documents) will be privileged and the inquiring party will not be able to penetrate that privilege to get proof.

“However, if the knowledge can be proved another way, then I cannot see a reason in principle why the inquiring party should not be able to seek to do that.”

Mann J said that whether the claimants would succeed in drawing an inference from the likelihood of the involvement of the legal department was a matter for trial.

“There may have to be further argument, in the proper trial context, as to how privilege operates. It may well not be an easy road for the claimants.

“It may be that fuller argument in the context of actual evidence will throw up additional difficulties (or conceivably make the route easier) but at this stage it is not possible to stop the inquiry on the basis that it is bound to fail… or on the basis that the inquiry is impermissibly going into privileged territory.”