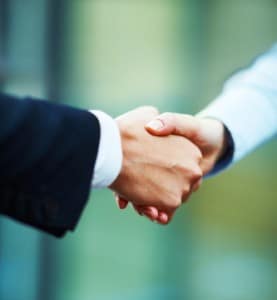 Deal done: a fifth of firms surveyed have merged in past six months

There is a much higher chance of merger among mid-sized law firms than small practices in the coming year but the well of good merger partners is far from bottomless, new research has found.

The survey found that while most had thought about merger in recent months, only 45% considered there to be either a good chance of one happening in the next year or that one was almost definite. There was, however, a sharp divide between bigger and smaller practices.

Well-known law firm consultant Andrew Otterburn, on behalf of the Law Consultancy Network, quizzed 50 firms in the latest in a series of six-monthly surveys, and while 62% of those with more than 10 partners said merger activity was a good chance or almost definite, only 27% of firms were fewer than 10 partners rated the possibility that high.

Just over a third of firms (35%) said there was little likelihood of a merger or acquisition in the coming year.

Firms cited improved size or structure, better opportunities post-Legal Services Act, and help with solving succession issues as the main drivers, and almost a fifth (19%) had already completed a merger in the last six months.

In all 80% of respondents said they had considered merger in recent months, and the survey found that the level of discussion was “much higher amongst larger firms”, which were talking to an average of 1.8 other firms.

Mr Otterburn said: “The survey indicates continuing strong merger activity, which is our experience among our clients. There is still much activity and discussion; however, there are only so many good firms out there. If merger is on your agenda and you have identified possible firms, start talking to them – before someone else does.

“Most firms we are advising have had discussions with at least one firm in recent months and have identified possible merger candidates or teams of people. Growth through merger or acquisition is not the only way of achieving growth, but it can be an effective way of achieving a step change – provided you can find a compatible partner, and that is the difficult part.”

One respondent told Mr Otterburn: “There are too many weak players with no money, no real goodwill, debts and no succession plan looking for a plank in the shipwreck of their firm on which to float away.”