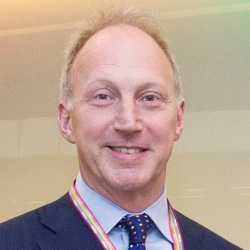 Moore: Work at home and network in the office?

The former global managing partner of Linklaters has suggested that the ‘metaverse’, an online world where people communicate through virtual reality, could help law firms deal with the challenges of remote working.

Gideon Moore also predicted that law firm offices would move to a “first come, first served” system for desk space, where partners no longer had priority.

Facebook announced at the weekend that it would be hiring 10,000 people in the EU over the next five years to work on the metaverse. CEO Mark Zuckerberg estimated that development would take 10-15 years.

Mr Moore, firmwide managing partner of Linklaters from 2015 to July this year, said the firm signed a new 30-year lease for its City HQ in Silk Street in February 2020.

A month later, after the pandemic struck, an associate asked him how it felt to go “from hero to zero”.

Speaking on a webinar, ‘Redesigning work in the legal sector’, organised with HR consultants HSM Advisory, Mr Moore said the new lease presented Linklaters with a “tremendous opportunity” to “craft something that will be fit for purpose”.

One of the challenges of hybrid working was the relationship between teams inside and outside the office, but technology could help, for example by arranging images of people sitting round a table at a meeting equally at the top of the screen rather than “vanishing into the distance”.

Mr Moore said that when the metaverse arrived, “at some stage in the future we may all be able to be represented by avatars” and “it got me thinking that you have that combination of real and virtual, present and remote”.

When it came to office space, he said law firms could not maintain “exactly how we’ve done things” and accommodate the changes required for the future.

“If you’re not going to be in the office, does it make sense for you to have a large space dedicated to yourself? Some colleagues are telling me that you can work at home and network in the office.”

Mr Moore described abandoning a “set office” and moving to a “first come, first served” system for desk space as the “right way to go”.

He said Linklaters had done some contingency planning for a recession three years ago, but not “a recession wrapped up in a global pandemic”.

Always a “fan of hybrid working”, he described how three years ago the executive committee of Linklaters had agreed to respond positively to hybrid working requests.

Bearing in mind a comment from the firm’s adviser, former Conservative leader William Hague, that “in politics you never waste a crisis”, Linklaters had “codified” its positive approach to hybrid working, meaning it now had to “backfill” in terms of improved training and communication.

“The implications of the past 18-21 months are only now beginning to unravel,” he added. “We’re moving from theory to practice.”