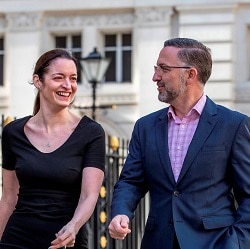 JLG is in negotiations with seven law firms with turnovers of between £2.5m and £5.5m, and expects to complete at least three of them in the north-west by the end of 2020, chief executive Brian Cullen told Legal Futures.

It will then look to move on to one or two bigger acquisitions next year of firms in the £8-15m bracket outside of the region.

JLG’s current turnover is £13m and Mr Cullen said the ambition was to hit £40-50m in the next three years. He is the new owner along with chief operating officer Joanna Kingston-Davies – neither of whom are solicitors – through their company MAPD Ventures.

MAPD stands for ‘Making a Positive Difference’, which he said was the group’s “single core value”. Mr Cullen said: “We stand for something – we’re not doing it just for money.”

That meant they were looking for firms “that are value-driven”. He added that he was not interested in distressed businesses and, despite the full-service focus, would not “actively pursue” personal injury-based firms or capital-hungry practices such as clinical negligence firms.

However, JLG already handles legal aid work and would consider expanding that. While legal aid fees were tight, they were paid every month “and there is some benefit in that”. JLG has also been able to turn its criminal law practice over the past two years into a profitable department.

The group was formed in 2016 after Liverpool firm Jackson Canter acquired Wirral-based Lees Solicitors. It employs 280 staff across six offices offering a broad range of both personal and commercial law services.

Broudie Jackson Canter is a separate brand within the group specialising in civil liberties and social welfare work, and it is currently working with families on the Manchester Arena bombing inquiry.

Acquired firms may be able to maintain their brands if there is good reason to – as has been the case with Broudie Jackson Canter, particularly because of the high-profile Hillsborough work – but Mr Cullen said that longer term a single brand would be on the table.

He explained that he and Ms Kingston-Davies they looked at “every type of funding”, meeting 12 institutions before narrowing it down to Shard and a private equity company.

There were various reasons for going with Shard – the pair wanted to maintain full ownership and did not want someone sitting on the board. Shard has board observer rights, “which they’ve said they’re not really interested in exercising unless there’s something going wrong”.

He continued: “I cannot tell you how much of a perfect partner Shard are – they are massively interested in our goal of reaching out to communities.”

Mr Cullen said the pair had no exit in mind: “We genuinely love it.” However, debt finance was “quite expensive at our end of the market” and JLG would refinance in four to five years’ time when the deal with Shard comes to an end.

Shard has provided debt finance for this and future deals. It describes itself as an innovative provider of alternative finance to SMEs operating in the “lower mid-market”, ie companies with an enterprise value of less than £50m.

Ms Kingston-Davies said: “Our strategy is predicated upon taking away the headache of ‘back office’ for law firm owners to free up their time to focus on localised growth and development.

“By providing strong operating platforms and infrastructure with defined career structures and leadership, we will enable traditional law firms to deal with succession issues and to focus on what they do best.”

Shard chief executive Alastair Brown said: “This represents our first investment from our current fund in the North-West region, which will form the nucleus of an ambitious buy-and-build acquisition strategy to create a more significant legal services group.”