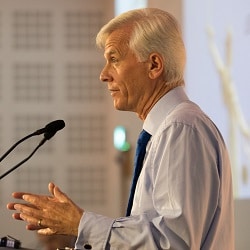 Mayson: Has concept of reserved legal activities ceased to be useful?

The head of the independent review of legal services regulation said yesterday that scrapping regulation based on titles like solicitor or barrister and replacing it with a system based on legal activities “might not be as straightforward as some believe”.

Speaking at yesterday’s Legal Futures Regulation and Compliance Conference, Professor Stephen Mayson indicated how his thoughts were taking shape in the run-up to publication of his interim report in September, while stressing he had come to no firm conclusions.

He restated his belief that professional titles were a “limiting factor in the development of regulation” and said that it “might be sensible” to move away from them, to a future where all ‘lawyers’ were regulated by activity.

However, he said that how far it might be possible to shift away from titles remained an “open question”.

The academic – who is undertaking the review with the support of University College London – said one of the problems with activity-based regulation was how to define the activities and he referred to Scotland’s independent review of legal services regulation, which found that this could actually increase the number of regulators.

“You could end up with more regulators than we have now, each regulating a different activity. It’s still a complex mosaic whichever way you cut the cake.”

The Law Society strongly defended title-based regulation in its response to the Mayson review in March this year and called for the public to be better educated about professional titles.

Professor Mayson said he agreed with the conclusions of the Competition and Market Authority’s study of the legal services market in describing the current framework as unsustainable and saying the justification for some reserved activities was stronger than for others.

Among the “big questions” Professor Mayson said the profession faced were whether to provide universal access to the Legal Ombudsman for all legal advice and whether the concept of reserved activities had ceased to be useful.

Alternatively, he suggested that only the before-the-event aspect of legal advice needed to be a reserved activity, as opposed to the during- or after-the-event aspects.

Professor Mayson said that for some “low-risk activities” access to the ombudsman or to compensation might not be needed and general consumer protection might be enough.

Specific forms of regulation could be applied in different circumstances, whether to a legal activity like will-writing, a type of service like handling client money or a kind of consumer such as a vulnerable client.

The professor said there was a need to address the regulation of lawtech and a new, “more flexible”, approach might be required.

If so, he questioned whether Parliament, the government or the regulators should be making the decisions.

He concluded by raising the question of how to achieve consistency in a future where all lawyers were subject to a single regulator.

Professor Mayson said he aimed to deliver his final report in January 2020, though he was making “no assumptions about the timing” of reform.

“I’m trying to put them in a much better position when they do decide to take another step.”

Sam Younger, chair of CILEx Regulation, said he believed “tougher regulation” was on the way for many sectors, not just legal services.

He said he could see this trend in his non-executive roles at the Advertising Standards Authority and at an international development charity.

Mr Younger said a single legal regulator could “spawn of whole bunch of sub-committees” and end up looking “a lot like what he have at the moment”.

He added: “The point at which the system may be seen to be broken is more likely to be driven by technology than anything else. My fear is that we end up with a cobbled-together solution at speed.”

Earlier this year, Ministry of Justice spokesman Lord Keen indicated that there was interest in reforming legal regulation, and Professor Mayson said officials were keeping a watching brief on his work.