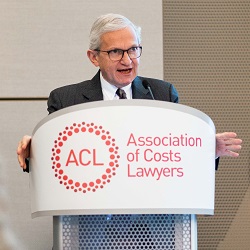 Vos: I am quite ambitious

The Master of the Rolls yesterday signalled his intention to revolutionise civil costs and has already set the Civil Justice Council (CJC) working on a wide-ranging review.

Sir Geoffrey Vos said: “It’s extremely important that we take the opportunity now to consider whether the ways in which we handle costs and costs shifting are fit for a modern justice system delivering dispute resolution digitally.”

Giving the keynote addressing at the Association of Costs Lawyers’ annual conference in London, he said that he has “already asked the CJC to embark a review of costs issues at all levels, including the guideline hourly rates”, as he indicated he would do [1] when setting the new rates in August.

There was, Sir Geoffrey explained, an “immediate need for an holistic consideration of a number of interconnected issues”.

First was the move from mainly face-to-face hearings to a mixture that also included remote hearings, which “may affect the way we look at costs recovery in different situations”.

“Secondly and perhaps more importantly, costs recovery will look very different in the online space with the implementation of an entirely digital online justice system for civil, family and tribunal cases.”

The third development was the government’s decision to increase the application of fixed recoverable costs to most money cases worth up to £100,000, “which is going to have far-reaching effects on the types of cases where summary and detailed assessments are needed”.

Further, Sir Geoffrey said, “we should undoubtedly take another look at costs budgeting now that considerable experience of its pros and cons has been obtained by judges, costs judges and practitioners alike”.

Though stressing that he would not start this process with “any preconceived ideas”, he recounted sitting in on a case and costs management conference in Birmingham recently in a clinical negligence case worth £100,000.

Much of the two-hour hearing was dedicated to costs budgeting, with many of the arguments focused on “quite small issues in the defendant’s costs budget”.

He continued: “And one was driven to wonder how often those costs are ever recovered against such claimants.”

Sir Geoffrey also listed his concern over “the seemingly unlimited costs incurred in lengthy cases in the Business & Property Courts and elsewhere in the system”.

He explained: “‘Money no object’ litigation needs careful consideration in the modern environment. First of all it utilises scare court resources that may be better devoted elsewhere.

“Secondly it’s sometimes undertaken for purely overseas parties with no obvious connection with this jurisdiction.

He conceded that the latter was rare but there have been “infrequent examples of litigation and its huge costs being used by oligarchs and others as a weapon to oppress or harm those on the receiving end”.

The final factor to consider was the development and use of pre-action portals, artificial intelligence and the blockchain, which required “a completely fresh look at the costs of civil litigation more generally”.

The MR said he was “quite ambitious” and keen for the CJC to help him understand “the bigger issues in the context of digitisation”.

He acknowledged that it was a big task but said he did not want rely on a “one-time generational review” like has happened in the past.

Sir Geoffrey said: “I want to make sure we’re sufficiently flexible and agile with the system that we are actually delivering a better service to the public…

“We can’t do that if we do nothing for 10 years and then get some big judge to put his or her name to a review, spending five years publishing it and then ignoring it for another five years before implementing it, by which time it’s become massively out of date.

“What I would like to see is the agility and insight from the CJC so that we can move more quickly to make incremental reforms to the system.”