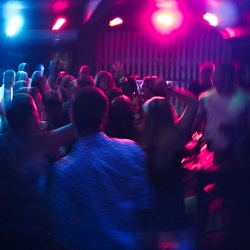 Bar: Misconduct began on the dancefloor

A male barrister who groped a female clerk from his chambers and a female trainee from his main instructing solicitors while on a Friday night out has been suspended for a year.

A Bar disciplinary tribunal said Duncan Maxwell-Stewart’s conduct – which he said he could not remember because of alcohol – amounted to an admission of sexual assault.

It actually suspended him for 18 months on each charge – significantly in excess of the starting point in the current sanction guidance – before reducing the terms to 12 months, to run concurrently, due to his admissions and mitigating circumstances.

The guidance is currently being reviewed, with sanctions for sexual misconduct being beefed up significantly. The tribunal, chaired by His Honour Judge Carroll, said it would be “failing in our duty not to recognise that the current suggested starting points are now perceived to be far below the levels necessary”.

Person A is a clerk/practice manager within Mr Maxwell-Stewart’s now former chambers.

Person B was a trainee at the firm which provided around a third of the barrister’s income. She had met him three times before the incident and worked on matters in which he was instructed.

Persons A and B had got to know each other and in February 2020 had a night out together, during which they messaged Mr Maxwell-Stewart to meet up. They did so in a bar, along with a friend of the barrister, at midnight. The women said they were not drunk.

Mr Maxwell-Stewart – who was called in 2007 – and Person A danced together, during which he lifted the hem of her skirt to her hip, showing her underwear. She was “immediately uncomfortable and made excuses to leave the dancefloor and return to the bar”, but when they got there Mr Maxwell-Stewart began dancing on tables.

“It was this that made Person A realise how drunk Mr Maxwell-Stewart was,” the tribunal recorded.

Person A suggested that they get another drink, which the tribunal said was “unfortunate” but understandable as a way to get him down from the tables.

He suggested they go upstairs to get the drink but there was no bar there and “it had the effect of isolating Person A from her friend”.

Mr Maxwell-Stewart said he had believed a bar was up there and, because of deafness in one ear, thought it would be easier to talk.

Whilst there, Mr Maxwell-Stewart “stood in very close proximity to Person A”. Though this in itself did not constitute misconduct, in context the tribunal considered that “he was in at least some degree motivated by sexual attraction”.

The barrister also told Person A not to tell her manager about them being out together, a comment that “further fuelled Person A’s sense of unease”.

At some point during the evening, Mr Maxwell-Stewart also groped Person B’s bottom.

The two women went outside to have a cigarette and told each other what had happened. They decided to leave but Person A had to return to the bar to collect her bag and coat.

“As she passed, Mr Maxwell-Stewart took hold of her jumper, untucked it and put his hand up inside her clothing to start ‘fiddling with [her] bra strap’.” When she left the bar, Person A was crying.

They both reported what had happened to their employers. The chambers began an internal grievance process which led to his expulsion. The law firm stopped instructing him. The tribunal praised both organisations for the support they gave the women.

The impact of the events hit Person A in particular. “Her mood at work changed from bubbly to withdrawn. She felt her work began to suffer. By the following Wednesday she was crying more than once per day in chambers.”

She had to take two weeks’ sick leave and has suffered with stress and flashbacks, requiring counselling.

Person A also said she felt an “overwhelming amount of guilt” that Mr Maxwell-Stewart had lost instructions and that solicitors and clients had been affected. “[I] have felt that I have been disloyal to chambers in reporting the assault and the inconvenience caused to all involved.”

Person B’s “immediate reaction was one of anger” but the tribunal said she would also have been anxious about the impact of reporting what had happened given how junior she was.

It also considered that, in the context of what amounted to criminal behaviour, his previous good character was “not of significant weight”.

In other mitigation, the tribunal heard that at the time he was suffering from ill health which he feared would result in the total loss of his hearing and so his career at the Bar. Further, he had suffered a bereavement in the days before the incident, while his marriage had recently broken down.

He was “effectively homeless” too when the events occurred, having access to only very temporary accommodation, and was suffering from a depressive illness as a result, it was reported.

The tribunal accepted that Mr Maxwell-Stewart had from the start admitted his conduct, “is genuinely embarrassed about it, is wholly and genuinely remorseful and that he has offered a full apology to both complainants”.

He has been in counselling, been sober since the incident, and attended training on harassment, bullying and inappropriate behaviour.

“It was further submitted that, as a direct result of this matter, Mr Maxwell-Stewart has lost his tenancy in both his Leeds and London chambers, that he is no longer instructed by the firm, and that he has lost his professional and personal reputation, and any realistic prospects for career advancement to leading counsel.”

Given his reliance on his psychiatric and emotional state in the mitigation, the tribunal said Mr Maxwell-Stewart could not be readmitted after the 12 months before filing with the Bar Standards Board a psychiatric report that he was fit for practice.