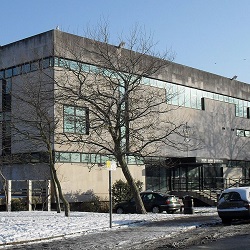 Worthing County Court: Exchange was overheard by another barrister

A male barrister has been reprimanded for describing his opponent’s instructing lawyer as a “hysterical woman” and female lawyers more generally as intemperate.

It rejected the argument that any finding would violate the barrister’s freedom of expression.

“This case is not about ‘policing the personal opinions of barristers’ as a matter of generality,” the three-person tribunal, headed by Jonathan Glasson QC, said.

“It is concerned with the question as to whether or not expressing sexist and discriminatory language, in the course of a discussion outside court, in a public waiting room and in the context of a discussion with a fellow barrister, is of such seriousness so as to amount to misconduct.”

In November 2019, Mr Kwiatkowski, who was called in 1977, spoke with ‘Person X’, a female barrister, at Worthing County Court ahead of a hearing.

The tribunal found that, during this, he described a witness statement from Person X’s instructing chartered legal executive as that of a “hysterical woman”, claiming his comment was “just fact”.

When Person X sought clarification whether he was referring to women being “intemperate”, he said he was.

As well as Person X taking notes, this last comment was overheard and written down by another barrister in the waiting room, who gave evidence that he considered Mr Kwiatkowski’s remarks as going “beyond a professional public disagreement between two members of the profession and strayed into one of a more hectoring/bullying nature”.

In her evidence, Person X said she told Mr Kwiatkowski that she considered his comments sexist and inappropriate. In response, he tried to relate examples of cases that backed up his view, but she refused to listen and moved to sit next to the other barrister.

Mr Kwiatkowski said in his witness statement that, while the entry of more women into the legal profession had brought with it a “more empathetic approach”, he considered that “one feature of this change is, in my experience, that female solicitors and ancillary staff, particularly at entry level in affected areas of practice, can be overemotional and can ‘overegg the pudding’, going overboard in routine situations”.

He went on: “Whilst it is a generalisation, of course, I do find that women tend to be more emotional than men. That is, I believe, a biological fact rather than an insult.”

The barrister said he believed the legal executive’s witness statement was an example of overegging.

Mr Kwiatkowski said he was “astonished” by Person X’s reaction to his comment, describing how she was “twitching, her eyes became wild and bulging, and her face was flushed”.

“I would never have anticipated that a fellow barrister might conceivably have reacted in the way that she did to attempts to have a discussion about professional matters.

“I did, nevertheless, leave her genuinely upset. For that, I repeat my sincere apologies. The incident has brought home to me the extent to which sensibilities have changed since I was called to the Bar and this is most certainly a point that I shall bear in mind in future.”

In his oral evidence, he said he thought it was wholly inappropriate that anyone should be asked to apologise for any view they had.

The tribunal found that Mr Kwiatkowski had breached core duty 5 – upholding trust and confidence in the profession – and it was sufficiently serious to be characterised as misconduct.

In mitigation on sanction, Mr Kwiatkowski’s counsel said he was not a misogynist and pointed to the fact that he had a daughter as proof of this.

Deciding on sanction, the tribunal took into account that Mr Kwiatkowski had a clean disciplinary record and that it was an isolated incident.

Aggravating factors were that the facts would undermine the profession in the eyes of the public, the events “clearly caused Person X some distress” and that Mr Kwiatkowski had not shown any remorse for the events: while he had apologised for any distress caused to Person X, he remained “implacably of the view that he did nothing wrong”.

A reprimand and low-level fine (as per the old sanctions guidance that was replaced last month) of £500 was the “appropriate sanction”, along with costs of £500, reduced from £2,500 on account of Mr Kwiatkowski’s means.

The ruling also revealed that the Bar Standards Board’s conduct and assessment team had originally decided not to refer Person X’s complaint for investigation.

It was only after Person X made a service complaint about the regulator’s failure to inform her about what was happening that the team’s head reviewed the original complaint and decided to refer the case onwards.