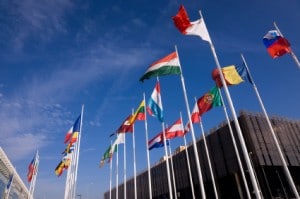 Protectionism among the mainland European bars is unlikely to stop determined UK-based alternative business structures (ABSs) from entering their markets, with various avenues open to them, according to new research.

The discussion document argued that if an ABS succeeded in gaining access to the German market – which within the EU is second only to the UK in size – resistance elsewhere in Europe could collapse.

Jakob Weberstaedt, a consultant to the Bucerius Centre on the Legal Profession in Hamburg, and a PhD student who previously practised at Baker & McKenzie’s Moscow office, outlined a number of strategies a UK-based ABS could adopt to obtain access to the German market without the local bar being able to prevent them.

He believed that access was unlikely to be won in a major decision of the European Court of Justice (ECJ). “Instead, the invasion of the European continent by English ABS is more likely to unfold in a series of skirmishes, involving a complex interplay between various judicial bodies (the ECJ being just one of them), national and European legislators and fights between liberal and protectionist forces within national bars.”

Mr Weberstaedt suggested the blanket opposition to ABSs by the German Federal Bar (BRAK) was vulnerable. This might happen in two main ways, one involving European lawyers becoming involved in ABSs already established here and the other by UK-based ABSs seeking to provide services in mainland Europe.

Continental lawyers could become investors in existing ABSs. This, he argued, would be “very unlikely to get a German lawyer into legal difficulties”. It would also be difficult for other European jurisdictions to keep their lawyers from investing.

Secondly, if a continental lawyer worked for an ABS on British soil, it was unclear that their home country could properly obstruct them.

The author suggested three possible ways in which ABSs could seek to provide legal services in continental Europe.

Firstly, for instance, operating on a membership-only basis, such as a co-operative or trade union, an ABS could comply with German law and thereby “make inroads by operating at the margin of the professional monopoly”. Similarly, an ABS with an internet-based model could take advantage of the European E-Commerce Directive.

Secondly, ABSs could rely on temporary provision of services allowed under the European Lawyers’ Services Directive 1977. The ECJ held in the Gebhard case that a company can maintain permanent offices and be covered by the freedom to provide services. “English ABS could go a long way with a legal strategy relying for as long as possible on the freedom to provide services and denying that their activities in other European member states amount to establishment,” said the author.

He was confident European bars “will not succeed” in closing down either of the above two routes and prevent UK ABSs offering services in mainland Europe.

Lastly, an ABS with non-lawyer investors could test the right to freedom of establishment in other EU states. Mr Weberstaedt termed this the “big ABS case” and he was uncertain whether the ECJ would back protectionism or not. But he concluded: “The English side could improve its odds in the ECJ by developing a comprehensive litigation strategy taking maximum advantage of its influence over the facts and timing of the ‘big ABS case’ in the ECJ.”

The author showed no patience for the argument that allowing non-lawyer ownership of law firms would compromise the independence of the legal profession, saying: “If it were true that professionals working in entities which are owned and operated by non-professionals leads to the end of professionalism, then hospitals should only allow doctors as shareholders and airlines should be owned by pilots. If this sounds ridiculous, then the rest is already a debate about the details of regulation.”

He described English ABSs as being an engine-room of innovation akin to Silicon Valley in the IT world: “Instead of some robber-baron era in legal services, the ABS-enabled new world emerging is more likely to resemble a ‘Legal Silicon Valley’. To a much greater extent than before, it is now possible for legal entrepreneurs to try out innovative business models. Some of them may not work but others will change the way we view legal services.”