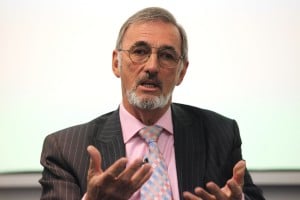 Edmonds: practitioners should not be forced to pay for trade association

The chairman of the Legal Services Board has criticised the “continuing spats” between the Law Society and Solicitors Regulation Authority (SRA).

David Edmonds also praised the improvements made by the SRA to the process for licensing alternative business structures (ABSs).

In an interview with Legal Futures following publication last week of the LSB’s blueprint for the future of legal services regulation, Mr Edmonds said that the Ministry of Justice’s review of regulation had brought forward a submission he was going to make in any case at the end of the year ahead of him stepping down next April.

However, he claimed that “I have no idea whatsoever” as to whether the government has the appetite for major reform.

Mr Edmonds said the LSB has made the Legal Services Act 2007 work when some thought it was unworkable.

“I don’t think the Act has failed; what’s failing is the ability of the institutions to drive the thing forward in the way in which I think the architects of the Act hoped they would, and the continuing spats between the Law Society and SRA are illustrative of the fact that the confusion over function makes regulation more difficult,” he said.

“I don’t think the Law Society should be arguing with the SRA over the amount of resource that’s needed to regulate the sector. I don’t think you should have to have that very complex infrastructure that’s been built in order to make regulation work.”

While it could take five years or more to reach the new regime as envisaged by the LSB – assuming the government supports it – he said in the short term much could be achieved simply by different behaviours.

“If they simply decided on both sides that they’re going to make this work, and the Law Society decided not to intervene in things that it didn’t need to intervene in, and let the SRA get on with its regulatory work, then many of those tensions could be removed quite easily.”

There are then further changes – such as simplifying the ABS licensing regime – that could be effected through “minor legislative change” while work was undertaken over building a new regulatory structure, probably a single regulator.

Another target is the element of practising fees that, under the Act, can be claimed by representative bodies – 20-25% of what solicitors pay goes to fund the Law Society, rather than the SRA. “It’s almost an issue of principle,” Mr Edmonds said. “Why should a representative body have first call if you like on the subscription that individuals pay towards being able to carry out their practice? Why should everybody have an automatic levy to be a member of a trade association? It’s a fair question, is it not?”

Mr Edmonds said that while he understood why the Clementi compromise was reached at the time, common sense dictates that a single regulator is the “inevitable outcome” of the reform process – assuming there is the political will.

He dismissed the Law Society’s call to roll back Clementi and return to a modified version of self-regulation. In fact, that “absolutely proves my point”, he said, describing it as “walking backwards slowly in the face of regulation to benefit the consumer”.

The LSB has had concerns over ABS licensing for a considerable time. Some of the problems are caused by the legislation, Mr Edmonds acknowledges – the detailed requirements are “founded in the lobbying and opposition of the lawyers when it went through Parliament” – but others are caused by how it is being implemented.

As an example he suggested that regulators should assume that a “big reputable player” looking to enter the market is going to act in a big reputable way, “because that’s how they do things”, rather than “starting from a suspicion that they are going to do something horrible”.

But he accepted that the SRA has made “significant improvements” in handling ABS applications. It will continue to keep a close eye, however, and conduct another review at the turn of the year.

One of the criticisms often thrown at the LSB is that it is meant to be an oversight regulator, but has sought to be a market regulator instead. Mr Edmonds thinks the board is both and indeed is quite vehement about the LSB being a market regulator.

“Regulation is often about dealing with market failure and what’s the big market failure in legal services?” he asked. “The fact that a large proportion of our fellow citizens don’t have access to legal services, because they don’t know where to get them from… and lots of people can’t afford them.”

A key duty under the Act was to introduce ABSs and open up the market. What is that if not market regulation? “Would ABSs have been introduced on anything like the same timescale or the same scale if we hadn’t driven it forward as a key objective from the outset of the LSB? No, of course they wouldn’t. I think we are very much a market regulator.”

He also suggests that far from being too large – as its critics insist – the LSB should actually have more than its current complement of 30 staff. He will be telling his successor that he or she should look at enhancing the LSB’s skills and at the resources actually needed to conduct proper performance analyses of the frontline regulators.

Notwithstanding possible reform, it is these three cornerstones of the Act – regulatory separation, ABS and sustaining the Legal Ombudsman and redress for consumers – that the LSB will continue to pursue at the same pace in the meantime, an approach Mr Edmonds said would also go to quell any concerns about the uncertainty that regulatory reform could otherwise engender.