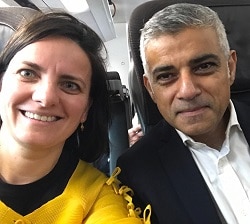 Dana Denis-Smith and Sadiq Khan on the Eurostar to Paris

Obelisk Support – the outsourcing company that uses former City solicitors to provide temporary support services to in-house teams and law firms – is eyeing up its first international office after it was the only legal business to join London Mayor Sadiq Khan on a trade mission to Paris.

Founder Dana Denis-Smith joined the leaders of 12 other high-growth London-based-SMEs in the mayor’s international business programme on the trip on Monday.

Delegates met with top French businesses and scoped out opportunities for international partnerships and expansion.

It is the Mayor’s second trade trip to Paris this year and Ms Denis-Smith was also on the first, which she revealed led to her building a relationship with Verizon, the $126bn US technology company which has its European headquarters in the French capital.

She explained that Verizon needed skilled lawyers fluent in French, German and English to work on specialist commercial technology contracts, and Obelisk won the contract. It now has 23 consultants active in country and 1,300 in total, having only hit the 1,000 mark [1] in the spring.

Ms Denis-Smith said: “The trade mission introduced us to large multinationals with a big presence in France, akin to the size that we provide consultants to in the UK. We met with organisations ranging from Johnson & Johnson to L’Oréal and BNP Paribas.

“The Mayor’s International Business Programme also connected the UK delegates to companies based in France that will help them start up there… Our next step will be open a physical office in Paris.”

The solicitor recommended others to get involved in the programme, which has also seen her join Mr Khan on a trade mission to New York.

“We’ve been able to access useful help and contacts for launching into new markets. With Brexit on the horizon, it has been great to be a part of a programme that is positive about British businesses collaborating with large international businesses.”