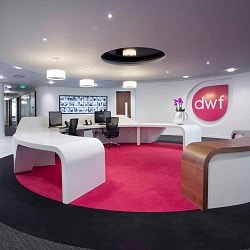 Two listed law firms yesterday issued bullish trading updates, with DWF announcing rising revenues alongside cuts, and Rosenblatt a 38% rise in revenues for the first six months of the year.

DWF, the world’s largest listed law firm, has been under the spotlight after the shock departure in May of chief executive Andrew Leaitherland, after the company said the disruption caused by the coronavirus was greater than expected.

He was replaced by chairman Sir Nigel Knowles.

Yesterday’s update said trading has been “strong” in May and June, the first two months of its financial year, with revenues and EBITDA ahead of budget and the same period in 2019.

The connected services division performed particularly well, with the insurance and commercial divisions also ahead on last year, but the update indicated that the international offices have been hit harder by Covid-19.

DWF told investors that, in addition to the £10m of savings announced in March, a further £5m had been identified “through a further review of the group’s cost base”, although half of this may be reinvested.

It is also closing its Brussels and Singapore offices, reducing its presence in Dubai and Cologne, and discontinuing its flexible lawyer service DWF Resource.

The discontinued operations represented 1.5% of group revenues and generated a £4.5m EBITDA loss in the last financial year.

The firm collected on average over £40m of cash in each of the past three months, and reduced lock-up days from 208 as at 30 April to 197 days in June.

Its net debt position has reduced to £64m and the cash balance as at 30 June was £18m, with total available facilities of £122m gross.

Investors responded positively, with DWF’s shares up 15% to 65.5p. Having been 140p in early March, they dived as low as 46p last week.

Sir Nigel said: “Despite the headwinds facing the global economy, I am pleased with the positive momentum that DWF has generated during the first two months of the year, with revenue and EBITDA ahead of prior year, and activity levels increasing.

“We have taken decisive action focused on consolidating our existing operations to increase profitability, deliver cost efficiencies and improve lock-up and cash generation.

Measures to scale-up managed services and optimise the international division will position DWF well for FY21 and beyond.

“Having had the opportunity to talk personally with many stakeholders, including both internal and external shareholders, I am very pleased that our new direction has such strong support.”

The update said that, while merger and acquisition opportunities were “on pause in the short term”, they remained an important part of DWF’s strategy.

As a result, revenue from fees in the first six months were 38% ahead of the same period last year, at approximately £11.4m.

“While the group continues to enjoy a strong pipeline of opportunities, the board notes that it is not certain that this rate of growth will continue in the second half of the year.”

Though it has not received any revenue from its litigation finance arm over the six months, it said it was about to fund four “potentially significant” cases and has a “growing pipeline of viable opportunities”.

In line with its strategy, the group will sell down a proportion of these investments.

Convex Capital, the specialist sell-side corporate finance boutique which RBG acquired last September for £22m, has seen nearly all the transactions planned for the first half of 2020 deferred.

RBG’s shares were down slightly at 69p yesterday, having recovered from a Covid-related low of 50p in April, but still well below the 100p they were at in February.