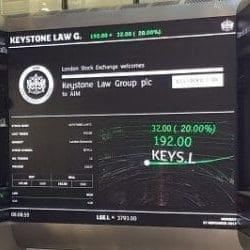 Listed law firm Keystone Law saw its turnover rise 6.5% in the first half of its financial year despite new instructions shrinking by nearing a third in the wake of lockdown.

However, while revenue reached £24.5m in the six months to 31 July, profit before tax fell 18% compared to the same period last year to £2.2m. The firm is debt free and its cash position remained strong, with £6.9m in the bank.

Though gross profit actually increased slightly, profit before tax fell because Keystone increased the size of its central office team over the last year and took on new office space.

The dispersed nature of Keystone’s model meant that it adapted easily to lockdown, and chief executive James Knight said “the fully variable remuneration structure of the lawyers, who are paid when Keystone is paid, as well as the group’s small property footprint, has meant that profits and cash have both been substantially protected despite the fall in demand from our clients”.

The number of new instructions fell by around 30% during the first six weeks of the lockdown, with property, family and private client the most severely affected, “whilst litigation, for example, has held up well”, he said.

Mr Knight said the effect on overall activity was “somewhat mitigated” by ongoing work on existing matters, meaning underlying activity dropped by 20% and at the end of June was still around 5% down on the levels seen at the start of the year.

Keystone now has 347 principals and 79 other fee-earners – mostly employed in ‘pods’ by principals, but around 10 of them work in the central office.

It saw a 27% rise in the number of ‘qualified’ new applicants, to 145, with 41 principal lawyers accepting offers to join.

Mr Knight said recruitment agencies drove the increase in the first half of 2020. “Whilst recruitment through this channel has historically yielded a lower conversion rate than our other channels, we are delighted that the recruiters are increasingly appreciating the opportunity that Keystone’s model presents, both for their candidates and for themselves…

“I am confident that the Covid-19 pandemic has highlighted some of the benefits of the Keystone model to many more lawyers.”

Having not issued a dividend when it announced its 2019 results back in March, Keystone announced two today: 3.3p per share for the first half of 2020 and another 3.3p, “being half of the amount that would have been paid as a final dividend for the year ended 31 January 2020 were it not for the outbreak of Covid-19”.

The latter struck “a reasonable balance between returning value to shareholders and ensuring that the cash position of the group is sufficiently robust to manage any further Covid-19 related effects in the second half of the year”, said Mr Knight.

Keystone’s shares have been surging over the last two years and a hit a high of 620p in February before falling back to 365p as the market slumped due to coronavirus. At the time of writing, the price was up 3.5% this morning to 450p.