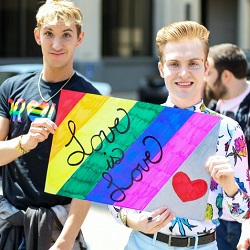 LGBT+: Lawyers able to be their authentic selves

Most LGBT+ lawyers feel able to be themselves around the office but more than a third have experienced homophobia, biphobia or transphobia in their workplace, new research has found.

Progress on trans, non-binary, and gender fluid issues was described as ‘embryonic’.

The Law Society’s LGBT+ Lawyers Division surveyed 617 legal professionals, 62% of whom identified as LGBT+. There were only 10 trans respondents.

Some 37% reported positive rather than negative (11%) impacts on their wellbeing from this, saying they were able to be their authentic selves, working in organisations with inclusive cultures and with support from colleagues and senior staff.

Negative experiences were about the strain of not being able to be their authentic selves, negative language being used in the workplace and the need to ‘repeatedly come out’.

Trans, non-binary, and gender fluid issues were more difficult, with progress was described as ‘embryonic’ and support sometimes viewed as being more theoretical than genuine – a higher proportion of respondents reported a visible commitment by senior managers to lesbian, gay and bisexual equality than to supporting trans staff (73% compared to 43%).

A higher proportion of gay men (49%) than lesbian/gay women (31%) or bisexual lawyers (16%) were out to clients. Bisexual respondents were also significantly less likely to be out to colleagues.

The majority of respondents in senior roles were out at work to colleagues, with comments suggesting that the experience of being out was easier at a more senior level; several senior lawyers reflected too on their feelings of responsibility to be a positive force for change.

However, just over half (52%) of LGBT+ respondents said a pressing issue for them was a lack of role models at work.

At the same time, not all respondents thought being out at work was an issue or necessary for them and around two-fifths (42%) indicated they did not have any pressing issues for them as LGBT+ lawyers in the workplace.

Some 37% of LGBT+ respondents had experienced homophobia, biphobia or transphobia in their workplace, however – it was less prevalent in national or local government employment – but only 18% of them had reported it to their employer. A further 8% indicated the incident had been reported by someone else.

The most common reason given for not reporting was feeling the behaviours were not serious enough to do so (40%), followed by a lack of confidence that it would be resolved effectively (26%) and being too afraid (14%).

Around three-quarters of respondents (78%) indicated there were opportunities to raise concerns anonymously or seek confidential support about such behaviour, but only just over half felt confident about accessing it.

Three out of five trans respondents had experienced transphobia in their workplaces, citing that this treatment – both verbal abuse and physical behaviours – had a longer-term impact on their career progression and mental health

A third of respondents reported microaggressions – indirect, subtle or unintended slights or insults – with this a particular issue for bisexual respondents.

Law Society president I Stephanie Boyce said: “In the last decade, there has been a sea-change in the attitudes to LGBT+ equality and visibility in the profession… However, there is still work to be done.”

In the society’s 2019 survey of practising certificate holders, 5% of solicitors defined themselves as being either lesbian, gay or bisexual, a higher proportion than the 3% reported in the general population of England and Wales.

According to the Solicitors Regulation Authority’s diversity data tool, 2% of solicitors are transgender.