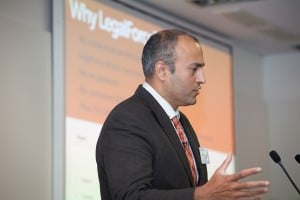 LegalForce, the US company that plans to build a legal services brand for innovators and start-ups based around a retail space, has stepped up its bid to build a UK network by appealing directly to sole practitioners and small law firms to apply to join.

The business, founded on a market-leading intellectual property (IP) law firm website, already has a US operation, launched earlier this year, based on a retail bookstore/coffee shop in Silicon Valley and plans to open a store in London in the coming months.

It has a partnership with the south London law firm Freeman Harris – also a member of the QualitySolicitors network – which handles trade mark work in the UK and Europe.

LegalForce started life as trade mark registration website Trademarkia, which was launched in 2008 and now claims to be the largest trade mark practice in the world with 15,000 clients.

Solicitors would have to sign up to LegalForce’s guidelines, which included guaranteeing an “extremely fast response” to clients, he warned. “We expect our solicitors and attorneys to have iPhones and iPads and respond within minutes, if not hours, and at most a day, not just on weekdays but whenever they can on the weekend as well.”

Mr Abhyanker said network members would also be expected to share “our vision of using the web to drive traffic and then build a deeper relationship with clients offline”. He said that through the LegalForce website – which he said has 2m unique visitors a month – the business already had more than 300 IP clients in the UK, who he predicted would also require corporate and other legal services. In the past year the Trademarkia site had received over 750,000 unique visitors from the UK alone.

He told the conference that he planned to create a global brand. He pointed out that apart from its HQ in California and its UK office at Freeman Harris, the business had a call centre in Phoenix, Arizona, India-based operational support for UK and US lawyers, and an office in China.

In the US LegalForce would take advantage of President Obama’s Jobs Act, which aimed to “jumpstart American business” by allowing companies to raise up to $1m (£644,000) from members of the public. It would raise funds by selling $10,000 shares to attorneys only, to keep within US rules on law firm ownership, he said.

Explaining to Legal Futures after his address how the London retail space would work, he said it would be based on the 8,000 sq ft ‘LegalForce BookFlip’ store in Palo Alto. Customers would be met by non-lawyer “concierges” who were “trained to be compassionate”. It would be “like a bookstore”, but coffee would be offered. “It’s a softer kind of sell,” he said.

When people revealed they needed legal help, they could either book time with a lawyer at a nearby LegalForce-branded “traditional law office” – which he likened to a Regus office space for network firms – or have a brief fixed-fee consultation. At the US store, a 15-minute consultation costs $45 (£38).

Mr Abhyanker said an “intake lawyer” employed by LegalForce would evaluate a client’s needs. If it was a complex problem, it would “go out to a network lawyer”, who would have exclusive jurisdiction based on geographic area and legal specialism. “Palo Alto and Silicon Valley will have one wills and trusts firm, one immigration firm,” he said as an example.

UK law firms would be thoroughly assessed before being allowed to join the LegalForce network, he stressed. “If you apply, we’ll have you evaluated, see what your reputation is, what kind of client references you have, how long you’ve been practising. We only want specialists, not generalists.”