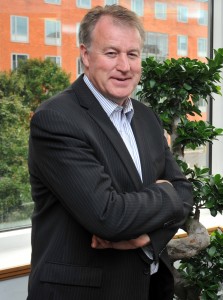 Stell: getting funding deal in place

The long-awaited opening of Legal365’s first city centre law shop will take place this year, one of its architects has told Legal Futures.

It launched in August 2011 as an online venture providing automated document assembly, and shortly afterwards won a Law Society award for excellence in innovation.

The plan was to open a shop in Leeds as a six-month pilot ahead of building a national network of city centre law shops. However, there has been no news since.

Speaking to Legal Futures yesterday to mark LCF’s rebranding, managing partner Simon Stell said work continued on the stores but that “we haven’t come up with the right funding deal yet”. This is likely to take the form of external investment, and LCF has drafted an alternative business structure (ABS) application in anticipation.

However, he said there was progress and he was confident it would get going this year. He noted that nobody else had yet seriously taken the plunge with this kind of retail venture, meaning the delay has not cost Legal365 in terms of being first to market.

The idea is to break down the barrier between clients and lawyers. The shop will seek to service clients immediately from the premises by having lawyers on hand to help fill out fixed-fee legal documents they have purchased. Clients with more complicated problems will be referred back to the firm, which has offices in Bradford, Leeds and Ilkley. As Legal365 develops, the shops may become full-service branches.

If the concept is rolled out nationally, Legal365 would look to build relationships with firms in other areas to service those clients whose work cannot be handled in-store; it could even become a franchise.

Mr Ahmed has been outspoken about what he sees as the failings of the traditional law firm, arguing that it will take entrepreneurs from outside the profession to deliver the wholesale change to the business model that is required.

“It’s not just about a brand,” he said previously. “The winners are going to be the companies that can deliver a disruptive model that makes legal services truly affordable and more accessible to the masses.”

As of today Last Cawthra Feather will be known as LCF Law, with a new tagline: ‘Law, Fair + Square’.