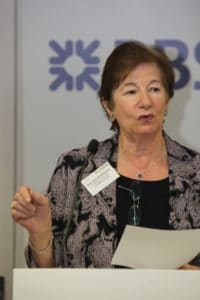 Legal regulation is “more than ripe for total overhaul”, a former chair of the Bar Standards Board has told the House of Lords.

Speaking in a recent debate on better regulation, Baroness Deech argued that by the time the Legal Services Act 2007 came into force, it was all already out of date because of the financial crash.

“The Clementi report highlighted consumerism, but recent events have taught us that the protection of innocent victims, the public interest and the highest ethical standards on the part of lawyers and bankers are more important than free market competition.

“Now we have legal services regulation—which is overregulation, duplication, interfering and sometimes without regard to the good practices of the professions—under the umbrella of the Legal Services Board.”

The board, she said, “over-enforces and places burdens on lawyers which are passed on to their clients”.

The 2007 Act was “badly crafted, for there is no clear focus, and mission creep was bound to happen” as one regulatory objective set out in the Act could be played off against another.

“Professional standards, although listed, seem to come low down. The fact that the Legal Services Board entertained the notion of abolishing the cab-rank rule and allowing referral fees went completely against the hallmark of the independent profession of the Bar, whose ethos underpins the rule of the law and citizens’ rights.

“Outcomes-focused regulation, as pushed, scarcely hits the mark. In its first programme of work in 2010, the Legal Services Board promised that, by 2013, legal services regulators in the UK would be seen as world leaders—the opposite, sadly, is true.”

Baroness Deech recounted how overseas lawyers viewed the set-up under the Act as introducing government involvement in the regulation of the profession, because the LSB reports to the Ministry of Justice and ministers appoint members of the board.

“Reform is urgently needed, even though the Ministry of Justice reviews have shied away from legislative change,” she said, commending the complete separation of the representative bodies and the regulatory arms.

“At the same time, it may pose overly onerous regulation on those who in fact need it least. There is no logic to which legal activities are regulated and which are not. I hope that the minister will tell us that this needs review, too.”

Complete separation of the legal regulators was also supported in the debate by Lord Whitty and Baroness Altman.

Government minister Lord Henley made no comment on whether the government would act on the consultation it held two years ago on independence, or on reviewing the reserved legal activities.