Legal Ombudsman to work on allowing complaints from non-clients 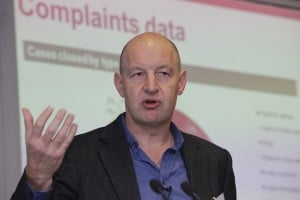 The Legal Ombudsman (LeO) is to begin work on what types of complaints it should accept from non-clients amid reports of lawyers harassing third parties over alleged debts, violating their privacy and doling out abusive treatment in court.

LeO is setting up a steering group aiming to reach agreement on which types of third-party complaints it could investigate in future, honouring a commitment it made following a review of its scheme last year.

The Legal Services Consumer Panel has supported a wide-ranging right for third parties to complain and today published 39 case studies of cases rejected by LeO to show the breadth of the problem. “Through no fault of their own, consumers can suffer severe financial and personal hardship due to the actions of a lawyer they have no professional relationship with,” the panel said.

“Often they suggest misconduct has taken place and here there is already an opportunity for regulators to act, although of course not to award redress to the victims. However, on other occasions, there seems clear evidence of poor service to third parties; if it had been the lawyer’s client who lost out in the same situations, the Legal Ombudsman would have been able to investigate.”

Panel chair Elisabeth Davies said: “The case studies include some real horror stories where consumers have been badly let down by lawyers, but then find the Legal Ombudsman cannot help them.

“This double whammy cannot be allowed to continue – it is deeply unfair, leaves bad practice unpunished and undermines public confidence in legal services regulation. The panel accepts that not all third-party complaints should be investigated, but the current blanket ban on all such complaints is plainly wrong.”

Chief Legal Ombudsman Adam Sampson said: “This is a tricky issue which needs to be grappled with to find a solution that is fair to consumers and lawyers.”

Membership details for the steering group will be announced shortly.

In its submission last year, the panel said the lack of redress can frustrate the intention of a contractual relationship with businesses on which consumers rely in good faith, and creates the possibility of lawyers falling outside LeO’s jurisdiction by entering into complex business arrangements.

It added that this gap in redress creates “weak incentives for fair dealing and ethical behaviour and limits the opportunities to learn the lessons from complaints”.