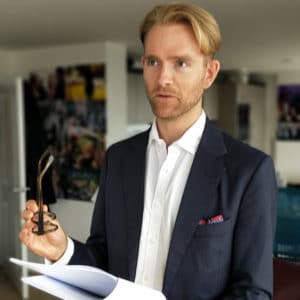 The English lawyer behind a bid to provide legal backing to deals involving both the virtual world of blockchain and real world commerce, has forecast that in a decade most global trade will be governed by arbitration agreements coupled with smart contracts.

Christopher Wray, chief legal officer of Mattereum, said the collaboration of lawyers and programmers was the best way to introduce legal certainty into future world merchandise export deals  – worth some $15tn (£10.8tn) in 2016, according to the World Trade Organisation.

Mattereum – founded last year by Vinay Gupta, who was instrumental in the launch of the blockchain platform Ethereum in 2015 – employs both programmers and lawyers, and has as a tagline “smart contracts for the real world”.

The company said in its publicity it would bring “the power and flexibility of software to legal contract execution, and the safety and reliability of law to the frontiers of digital trade”.

It is a project of the so-called internet of agreements (IoA), the intellectual foundation behind moves to integrate new digital transactions into the existing commercial world.

The 1958 New York convention on the recognition and enforcement of foreign arbitral awards, which has 157 state signatories, provided the flexibility needed to accommodate the needs of clients contracting to sell goods around the world, he said.

He added: “I think if you go out 10 years into the future I’d feel quite comfortable predicting you’ll have entire supply chains using… smart contracts paired with the appropriate legal documentation.

“So in the event that anything goes wrong, it’s clear what the process will be and the parties can rely on competent arbitration to resolve it.”

Holding funds in escrow was reasonable on a consumer level, he argued. “But when you start to look at [deals] on a much larger scale, the supply chains where liquidity is at a premium, that kind of escrow certainly isn’t going to work.”

The Mattereum model is built on ‘Ricardian contracts’, which are the template for tying legal contracts to digital assets issued over the internet. Their inventor, financial cryptographer Ian Grigg, is Matterium’s chief scientist.

Mr Wray described Matterium’s offering as “a combination of both legal input and technical input to come up with something that involves both functioning software but also legal documentation.

“Obviously hopefully [it won’t] have to be used but if something does go wrong then it will be clear how to interpret what everyone’s expectations were to resolve it in a way that is relatively easy to predict.”

Without a legal document tied to the digital transaction, he said, a judge would still be able to find there was a contract and imply terms, but it would be a comparatively expensive outcome.

Some arbitrators existed now with the “necessary technical expertise”  – and have been used by Matterium  – but in future the number would need to be “scaled up”.

Mattereum planned to operate a licensing model, where contracting parties would pay the company a relatively small sum for legal certainty, he said.

“It’s a slightly different model from a conventional approach of a law firm, which is that you charge a very large fee for producing the paperwork and then in a way you walk away…

“Because it’s both a bit of legal but also a piece of software it’s closer to a software licensing model, so we are charging ongoing licensing fees for the use of this combined software with legal documentation.”

Mr Wray predicted that in future there would be generic smart contracts: “It’s going to make sense to move towards standardisation of the kind of commercial agreements that people are entering into, which of course makes it easier to scale.”

At present Mattereum had little competition to contend with, he said. Most other companies looking at dispute resolution in cyberspace were focusing on lower-end transactions.

He explained: “Most of the other people in the space are going for a longer-term, more ambitious outcome of maybe complete translatability between legal wording and code – that glorious future where you’ve got AI [artificial intelligence] judges and a single piece of code can be instantly translated into appropriate legal wording in any jurisdiction in the world.

“[These are] efforts looking towards the lower end of the market where maybe you want to automate absolutely everything you can because it’s low-value transactions and no one really wants to spend anything on resolution.

“But if it’s more substantial business-to-business – real commercial transactions – then everybody needs to know that if something goes wrong, it’s going to be handled in an appropriate way.”

Last month, Mattereum signed a deal with blockchain specialist Sweetbridge, under which Matterium will provide legal backing for smart contracts conducted on the Sweetbridge platform.