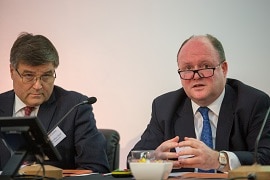 A third of the top 300 UK law firms will have disappeared by 2022, a law firm finance expert predicted at yesterday’s Legal Futures Innovation Conference.

John Llewellyn-Lloyd, who advised London firm Gordon Dadds on its recent flotation, said that by then there would also be at least 10 listed law firms, with a combined capitalisation of £2bn.

Last week’s announcement that Keystone Law is to float makes three, and with Gateley as well, they already have a joint capitalisation of around £250m, he said.

Mr Llewellyn-Lloyd, corporate finance director at Arden Partners and a qualified barrister, said accountants would have a further £500m slice of the market, while fixed fees would be the norm for all consumer work, delivered increasingly by mobile devices.

“We are already seeing the global elite firms, the big American and magic circle firms, apply more and more pressure on the middle-market players who are definitely getting the squeeze,” he said.

“Increasingly the trend for them will be to merge or specialise – standing still is not an option.

“The high street will see big changes in the next three to four years and it will all be about scale and price efficiency,” he predicted.

“At the moment the price point is wrong, lawyers are not prepared to provide a service at a relatively low price, and the transparency is not there. As this is corrected over the next few years, there will be a lot of consolidation.”

Mr Llewellyn-Lloyd said it was “very difficult” for traditionally structured law firms to make the right decisions in a rapidly changing market, and easier for alternative business structures, which he observed were generally adopting corporate models.

“Every new ABS is another nail in the coffin of the partnership model,” he said.

Mr Llewellyn-Lloyd took issue with complacent lawyers whose reaction to the troubles of Slater & Gordon was to say: “What a complete failure, it will never survive – happy days.”

He said: “Slater & Gordon has survived. It’s been refinanced, and within two to three years it could be back in rude health as a dominant player in the market.”

“This will force a change of culture in law firms. For the first time they will have to prioritise the recruitment of non-legal staff.

“There will be far fewer trainee solicitors going forward. Business models will be far more specific and will only want to train the trainees they actually need. They days of over-recruitment at the trainee level will have gone.”

Mr Llewellyn-Lloyd said the main pathway to becoming a trainee would be by spending one or two years as a paralegal, and law firms, just like accountancy firms, would put the emphasis on getting new recruits to bring in revenue as soon as possible as apprentices.

Adrian Biles, chief executive of Gordon Dadds, said the firm, which has increased revenue from £2.7m in 2013 to over £25m in 2017 through an ambitious acquisition strategy, was talking to a “number of legal aid firms” about joining the business.

“Legal aid plays an incredibly important role in the profession. Just because I don’t know how to do it doesn’t mean it can’t be done well.”

He added that it was only a “matter of time” before Gordon Dadds completed another 12 acquisitions.

“It’s not a matter of if, but when. In terms of the firms we’re talking to, we’ve got a pipeline with nine figures in it.”

He added that his understanding was that Quindell would have sold its professional services division to Slater & Gordon for £100m, rather than the £637m that it offered.