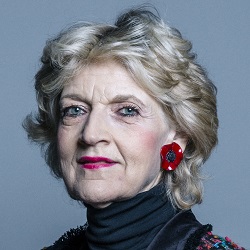 The mobile phone of Baroness Shackleton, one of the country’s highest-profile solicitors, was hacked on the authority of the ruler of Dubai and she was alerted to it by Cherie Blair QC, it emerged yesterday in an extraordinary Court of Appeal ruling.

The phone of her then senior associate at London law firm Payne Hicks Beach, Nick Manners – who is now a partner – was also hacked, along with their client and three other people, the court said in upholding a previously unpublished decision by the president of the Family Division, Sir Andrew McFarlane.

Baroness Shackleton, a renowned family law solicitor, is acting for Princess Haya Bint Al Hussein, an ex-wife of Sheikh Mohammed Bin Rashid Al Maktoum – the ruler of Dubai and the vice-president and prime minister of the United Arab Emirates – in contact proceedings relating to their two daughters, who live with their mother in England.

In September 2020, Princess Haya made an ex parte application alleging that she and some of her legal advisers and staff had been the subject of surveillance.

This was after Baroness Shackleton was alerted by two different sources that she and her client may have been hacked using software called Pegasus.

Pegasus was created by Israeli company NSO Group for the exclusive use of governments and their intelligence services; unlike conventional malware, it can connect with a device without the owner doing anything at all.

One of the sources was an academic with an interest in electronic surveillance, who discovered it while investigating an attempted hack of a UAE activist. The other was Mrs Blair, the chair of alternative business structure Omnia Strategy, who is an adviser to NSO on business and human rights-related issues.

NSO told her that its software may have been misused to monitor the mobile phones of Baroness Shackleton and Princess Haya. The company said it had taken steps to ensure the phones could not be accessed again using Pegasus and asked for her help in contacting Baroness Shackleton.

Sheikh Mohammed denies any involvement in or knowledge of the hacking or having received any knowledge as a result of it.

This all led to various hearings and a case management decision made by Sir Andrew in March to refuse to order the disclosure of data that helped identify the hacks to an adviser of the father also based in Israel; however, the judge instead encouraged an application to instruct a UK-based expert under part 25 of the Family Procedure Rules.

This was not taken up and the following month, at a fact-finding hearing, Sir Andrew ruled that Princess Haya’s phone had been successfully hacked, and it was “probable” that the solicitors’ phones had been too.

There was also at least an attempt to hack the phones of the princess’s personal assistant and two members of her security staff.

He continued that this was done by servants or agents of Sheikh Mohammed on his express or implied authority.

In ruling that Sir Andrew’s case management decisions were procedurally fair, the Court of Appeal made clear that “there can be no challenge” to the hacking findings.

Sir Andrew had not been prepared to allow the sheikh to conduct a parallel analysis using an expert out of the jurisdiction over whom he would have no control and no sanction but was prepared to give him access to the data by following the standard approach to testing expert evidence in children proceedings under part 25.

Lady Justice King, giving the unanimous ruling of the Court of Appeal, said: “In my judgment the father had an effective opportunity to test the evidence.

“If he chose not to take it to the full extent because he was not prepared to comply with the procedural processes of the jurisdiction to which he had chosen to subject himself through this application, that was a matter for him.”

In his decision, Sir Andrew strongly rejected the argument by Lord Pannick QC, for Sheikh Mohammed, that the hacking allegations would make no substantial difference to the issue of contact.

He said: “I regard the findings that I have now made to be of the utmost seriousness in the context of the children’s welfare.

“They may well have a profound impact upon the ability of the mother and of the court to trust him with any but the most minimal and secure arrangements for contact with his children in the future.”

King LJ noted that the allegations came before the court at a time when Sir Andrew had already made very serious findings against the sheikh.

These included the forced abduction of one of the father’s elder daughters, Princess Shamsa, from England in 2000; the restraint and house-arrest of another of daughter, Princess Latifa, from 2002, along with her capture and forced return to Dubai from a boat in international waters off India in 2018; and a campaign of fear and intimidation against Princess Haya before she left Dubai in 2019, which continued in the form of threats and harassment after she arrived in England.

King LJ said Lord Pannick’s description of this as “bad behaviour” was “a gross understatement”.

It was in this context, she explained, that Sir Andrew had to decide whether the sheikh had facilitated the hacking to gain access to sensitive and confidential information, including in relation to the princess’s security arrangements.

The judge noted that both sides had spent £2.5m in costs alone just on this appeal: “Given the nature and extent of the litigation to date together with the vast sums employed by the father in order to achieve his goal… it is easy to forget that behind this appeal is an application for contact being made by a father to his two young children.”