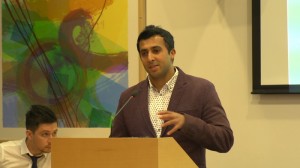 The websites of leading law firms are failing to take advantage of consumers’ changing habits, a new study has claimed.

The ‘white video’ issued by digital marketing agency mmadigital reported that 56% of the top 200 law firms do not have a mobile responsive website that can be viewed across a range of devices, such as tablets or mobiles.

Yet of the two million online searches for legal terms made in the UK every day, over a third are done via mobile or tablet, the company said.

It also found that the top firms are ignoring the power of video to attract clients, with only one in every 10 using video on their home page.

The study said only 28% of content is read on an average web page, compared to video which typically holds the attention for two minutes; mmadigital said firms with video on their websites are 50 times more likely to appear on the first page of Google.

Dez Derry, CEO of mmadigital, said: “It’s a simple fact that clients want to find legal services online and they’re also doing it more while on the move. Having a basic web presence is not enough anymore; law firms need to establish well thought-out digital marketing strategies that reflect the way clients want to buy and interact. This means embracing mobile technology and using video rather than pages of text to promote their services.

“If your law firm can be accessed from a mobile device and has short videos instead of text, potential clients will be more likely to choose you for their legal work because this is the user experience that they are getting in other parts of their online lives.”

The top 200 law firms fared better on compatibility, with almost all websites compatible with Google Chrome, Internet Explorer and Safari, while 94% of websites loaded within four seconds, the recommended load time by Google.

However, the picture around compliance was far less positive, as the research discovered that only 18% of firms were fully compliant with the SRA Code of Conduct, E-Commerce Directive, the Companies Act and the Business Names Act.

Alongside the white video, mmadigital has also created a website, www.comparemyfirm.co.uk, to allow firms to benchmark themselves against their competitors.