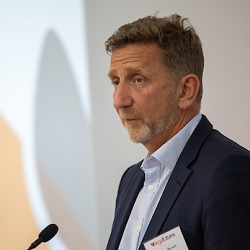 Bunch: The old form of capitalism will not last

The law firm leading the new wave of firms balancing profit with social purpose has turned down “quite a lot” of potential clients for ethical reasons, its managing partner revealed last week.

Speaking at the Legal Futures Innovation Conference in London last week, he said that, if there was a potential client that “we feel won’t sit well with us”, research was done and “the partner who wants to act for that client comes to the group and explains why they want to do it”, before the group took the decision.

Asked whether associates who were not comfortable about working for a client could refuse to act, Mr Bunch said it “doesn’t happen very often” but has occasionally in the past.

In 2015, Bates Wells was the first law firm to certify as a B Corp [1], through which it committed to making a positive impact on society and the environment. Radiant Law became a B Corp in 2020 followed by Mishcon de Reya this summer [2].

Mr Bunch said the particular focus for Bates Wells was on the environment and on equality, diversity and inclusion.

He said the law firm “recognised the climate emergency” in 2019 and was “recycling just about everything” to achieve zero waste to landfill; staff benefit from a climate perks travel scheme, where they are given additional days in holiday if they avoid flying.

The firm has also created a “sustainable pension scheme”, which he described as “the most impactful decision you can take as a firm in terms of climate action”.

Diversity initiatives included the “upward mentoring” of Black staff and working with the Sutton Trust and local schools to improve social mobility.

“Being sustainable and inclusive costs time and money. This is not about maximising profit but balancing it with social and environmental gain.

“It’s a hard sell for traditional law firms, but it makes business more attractive and enjoyable and it’s easy to be proud of what you do.”

He added: “The old form of capitalism will not last. This is the way things will be done in the future. Law firms need to understand if they’re going to survive and be stable.” 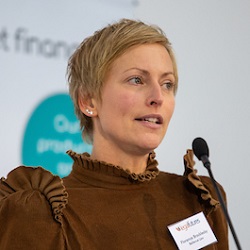 Brocklesby: Some law firm not treating their staff as advertised

Florence Brocklesby, founder of niche firm Bellevue Law, said the firm was set up to offer former City lawyers flexible working and 90% of its lawyers were female.

Bellevue Law has signed up to the less demanding Good Business Charter but is working towards B Corp status, despite it being particularly tough going for a small firm.

But she said both were “as nothing” compared to the people and culture of a practice.

Ms Brocklesby said she specialised in discrimination law, mostly for women in professional services, and “it is fair to say I have a particular insight into how some law firms are not doing good business when it comes to treating their people fairly”.

“I can’t tell you how many women I’ve represented work for firms with immaculate diversity policies, with whole teams responsible for diversity and inclusion and pictures of smiling women in power suits all over their websites, which will tolerate and practice shocking harassment and discrimination.”

Lindsay Healy, founder of unregulated dispersed commercial firm Aria Grace Law, which is also on the road to B-Corp status, described himself as the “Bob Geldof of commercial law”.

Consultant lawyers at the law firm keep 90% of their earnings. Any profit the firm makes on the remaining 10% goes to charity – from £20,000 in its first year to over £200,000 in the current financial year and an ambitious target of £2m next year.

He said the firm did “an awful lot” of pro bono, including representing sub-postmasters wrongly convicted of false accounting and theft by the Post Office.

You can watch the “Doing business, doing good” session from the Legal Futures Innovation conference below: