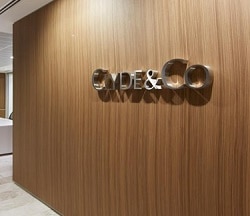 City firm Clyde & Co has been fined £50,000 – the largest penalty issued against a law firm – and three of its partners £10,000 each for allowing its client account to be used as a banking facility and breaching anti-money laundering rules.

A notice from the Solicitors Regulation Authority (SRA), published today, said the Solicitors Disciplinary Tribunal made the ruling last month after considering an application to approve an agreed outcome in relation to the firm and Christoper Duffy, Simon Gamblin and Nicholas Purnell.

Agreed outcomes are becoming more common in cases where SRA-approved regulatory settlement agreements are insufficient as they are limited to the SRA’s power to rebuke and fine up to £2,000.

They admitting allowing the firm’s client bank account to be used as a banking facility, and failing to act in accordance with their obligations under the Money Laundering Regulations 2007.

Further, the firm, Mr Duffy and Mr Purnell admitted that they failed to heed the guidance in the Law Society’s fraudulent financial arrangements warning and/or the warning notice on money laundering, “in that they acted as escrow agent in transactions on behalf of a client, that had the hallmarks of dubious financial arrangements or investment schemes”.

Clyde & Co also admitted that it failed to have in place adequate procedures to deal with dormant client balances.

The full ruling will be published in a few weeks.

In a statement, Clyde & Co said: “We hold ourselves to the highest professional and ethical standards and take responsibility for ensuring we meet them.

“We acknowledge that in three matters that occurred in 2013 and prior, we did not meet those high standards and the firm and three of its partners did act in breach of the SRA accounts rules and the Money Laundering Regulations, which also led to breaches of certain SRA principles and code.

“We believe it to be clear, and the SRA does not dispute, that any mistakes made were honest and inadvertent. It is not alleged that the firm or the three partners lacked integrity, probity or trustworthiness, or laundered or misappropriated money.

“We have worked constructively with our regulator and we are confident that the circumstances which led to these breaches could not happen again. We have since reviewed and strengthened a number of aspects of our approach to risk management.”

In 2013, London practice Fuglers was also fined a record £50,000 and its two equity partners £25,000 between them for allowing Portsmouth Football Club to use its client account as a banking facility to service its day-to-day trading activities, a decision upheld by the High Court.

The highest fine for an individual is £305,000, handed out in 2015 to a solicitor who was found to have taken advantage of an elderly client.