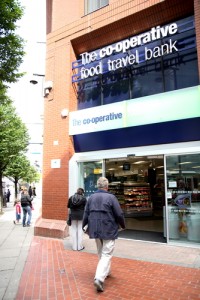 High street solicitors may soon become a thing of the past if steps are not taken to curb and regulate the predatory marketing of national organisations keen to move into the legal sector next year, the Lawyers Defence Group [2](LDG) has warned.

LDG, which is a Legal Futures Associate, spoke out in the wake of an announcement by the Co-operative Group that it intends to launch a nine-week campaign promoting its legal services to food shoppers in its nationwide chain of 3,000 supermarkets by the use of in-store radio and animated till screen displays.

“High street solicitors are being forced into a corner by government-initiated plans which claim to be in the public good but which are likely to have the opposite effect by reducing public access to legal services,” said LDG manager and solicitor Duncan Finlyson.

“The vast majority of provincial solicitors neither have access to the kind of marketing budget which organisations such as the Co-op possess nor the ability to be able to target a captive audience of shoppers. We are repeatedly being told that new regulations [enabling alternative business structures] will ensure that there is a level playing field for all those involved in the provision of legal services. Whilst the field may be level, unfortunately the teams are not. It is like pitting an amateur football team against Arsenal.”

LDG said it is encountering an increasing number of provincial law firms experiencing financial problems and either going out of business, needing to make savage cuts in staff and services or having to support the practice from savings and borrowings.

Mr Finlyson called on those in whichever party forms the next government to look realistically at the plans for ABS and to factor in the commercial effect which those plans are likely to have upon the many thousands of smaller legal practices that currently provide services to families and small businesses around the country.

“Times are incredibly tough for many domestic and small-business lawyers,” he said. “The vast majority of firms, whilst able to provide an excellent and, in most cases, good-value service to clients, simply cannot afford to compete in terms of marketing and promotion. They will simply be squeezed out of the market and it will be the pubic, ultimately, who will suffer when access to legal representation becomes concentrated in the hands of larger organisations driven exclusively by profit and commerciality.”