Lawyers urged to use the law to fight climate change 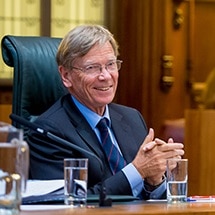 An independent collaboration of lawyers, calling itself the Chancery Lane Project, is to publish a set of model laws and contract clauses later this month to help the profession around the world fight climate change.

The first drafts of the Climate Contract Playbook and Green Paper of Model Laws were produced by a legal hackathon at the offices of Thomson Reuters in November last year.

The initiative grew out of the London Climate Action Week 2019 and there are now 55 leading law firms, in-house teams, chambers, organisations and others signed up to it.

The project has the backing of Supreme Court justice Lord Carnwath – who has been heavily involved in environmental work for many years, including as part of the Global Judges’ Institute for the Environment – along with the Law Society, Bar Council and legal pressure group Client Earth.

The Climate Contract Playbook is made up of 16 model clauses designed to help lawyers and businesses wanting to terminate contracts and switch to more climate-friendly suppliers; build “green improvement obligations” into supply contracts; include net-zero emissions targets in contracts; help fight climate change through investments; and encourage voluntary work on climate change through sabbaticals.

The green paper sets out seven model laws to accelerate the transition to net-zero emissions, including a change to planning regulations in favour of sustainable developments and an incentive to “mobilise infrastructure scale investment” into tree planting.

The contract precedents and model laws are free to use for lawyers, businesses and policymakers.

Lord Carnwath encouraged lawyers and businesses to use the contract clauses “wherever practicable” and said the role of commercial lawyers in tackling climate change had been “largely overlooked”.

The Supreme Court justice said lawyers “who draft the contracts that shape the economic relationships of our society must use these arrangements to enable rather than hinder the transition” to net-zero emissions.

Matthew Gingell, chair of the project’s steering group and general counsel at Oxygen House Group, said: “No one person or organisation has all answers. It is about the collective effort in finding them. We believe all lawyers can make a difference from corporate solicitors to human rights barristers.

“Our laws and contracts have until now allowed and encouraged humans to live unsustainably.”

Leading environmental law QC Stephen Tromans, based at 39 Essex, added: “I think it’s a really good collection of suggestions, all of which seem sensible and practical. The strength actually lies in the ‘randomness’ of ideas which individuals have had.

“I guess it’s like the parable of the sower – some will fall on stony ground but others may hit a nerve and get picked up.”

Other organisations backing the project include the Legal Sustainability Alliance, a group of law firms and organisations working together to improve the sustainability of their operations, the UK In-House Pro Bono Group, and the Commonwealth Climate and Law Initiative.

The latter is a research project examining “the legal basis for directors and trustees to consider, manage, and report on climate change-related risk, and the circumstances in which they may be liable for failing to do so”. It is currently based in Australia, Canada, South Africa and the UK.

Caroline May, co-chair of the Legal Sustainability Alliance and EMEA head of environment at City law firm Norton Rose Fulbright, is a member of the project’s steering group.

She said the project was a “clarion call for the legal profession”, enabling “lawyers working together to frame a response to the most urgent issue of our times”.

Ellie Mulholland, director of the Commonwealth Climate and Law Initiative, said: “Business, investors, central banks, and schoolchildren understand that the climate crisis is a mega trend shaping the global risk landscape and we must act today, yet lawyers have not always been part of the conversation.

“The climate contract playbook and green paper are the roadmap for how lawyers can use their legal expertise to drive climate solutions for their clients and communities.”

The project added that the model clauses and laws had each been given a child’s name “to ensure we are connected to the next generation for whom the changes we make are so important”.