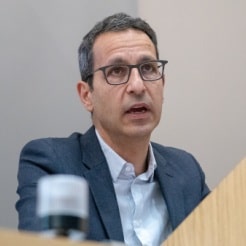 Solomon: A trusted relationship is vital

Law firms and other advisers are often organised so they only see a legal problem that needs to be resolved, rather than take a ‘whole person’ approach to clients, the head of a well-known legal charity has said.

Mr Solomon was speaking at a Legal Services Board event on the impact of public legal education, held on Monday to kick off Justice Week.

He explained how research showed that young people between the ages of 18 to 24 were more likely than those aged over 25 to report one or more legal problems – but the vast majority, 84%, received no help “whatsoever” to deal with them.

This was made worse by the fact that four of the five most common legal problems affecting young people, including housing and employment issues, were no longer within the scope of legal aid.

“If you think about the context for these young people who are facing multiple legal problems, whose lives could be vastly improved by good-quality access to justice, it’s just not there for them,” Mr Solomon said.

The charity has identified three elements to making a difference to young people who need access to justice, starting with taking a ‘whole person’ approach.

“[Advisers] may talk about taking a whole person approach but the reality is they’re not able to because they don’t have the staff with the different disciplines and skills to enable them to do that.”

But legal problems were often linked to other issues, such as ill health, and access to employment or education. “It’s not just a question of addressing one particular problem and assuming that young person’s legal issues will be resolved…

“It’s about interacting with them and understanding that they’ve got other things going on in their lives.”

Third was establishing a trusted, rather than transactional, relationship. Mr Solomon said: “The best lawyers do this. It’s about building a relationship where the young person or adult facing multiple needs begins to have trust and faith in their lawyer, individual adviser or advocate who is there to provide them with support and help.

“Unless you build that trusted relationship they are far less likely to engage and have positive outcomes.”

He said Just for Kids Law has found that using these three principles have helped it to make a difference – three-quarters of young people it worked with “have improved knowledge of their rights and entitlements, and have confidence that their situation has improved”.

There were then “knock-on benefits”, Mr Solomon said: “If you begin to resolve the legal issues a young person or adult is facing, it has consequential benefits for their mental health and emotional wellbeing. We also know… that it impacts on a young person’s sense of social isolation.”