Lawyers “must make way” for justice innovation to take hold 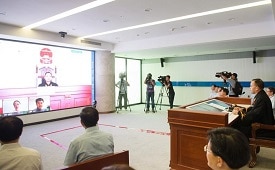 A report on global access to legal services has identified established legal professions led by lawyers as a block to progress and urged them to step aside in favour of non-lawyer leaders who can be relied on to bring in necessary reforms without self-interest.

Among suggestions for radical change was an increasing role for less-qualified, locally-based paralegals to shoulder some of the work currently reserved to lawyers.

It also strongly praised the regulatory model created by the Legal Services Act 2007 as a way to foster innovation and accessibility.

The report was the second taking a global approach to legal services in the space of a week, and also located many problems of legal innovation in the difficulty of reaching the required scale and the context of funding pressures, such as a lack of ‘room to fail’.

The report – Innovating justice: needed and possible – was published this week by a taskforce of Pathfinders for Peaceful, Just and Inclusive Societies.

The Pathfinders is an organisation that counts several United Nations members, including the UK, and UN bodies among its supporters, and the taskforce was co-chaired by justice ministers from Argentina and Sierra Leone and a trade minister from the Netherlands.

The taskforce said there were 244m people around the world in critical need of legal security and the protection of a rule of law, plus another 1.5bn with unmet everyday legal needs and 4.4bn who lacked legal identity.

It said that despite the world becoming more connected by the internet and social media, a trend hastened by urbanisation – possibly speeded up by climate change – there was a justice gap not being bridged by innovation, with a consequent price to be paid in widespread lack of trust in societies.

Key among urgent change needed, the report stressed, was a “mental” shift towards seeing justice not as applying norms to people’s behaviour, but re-framed in terms of their justice needs “and the fairness of their relationships”.

This meant that justice systems run by lawyers and legal practitioners had to give way to non-lawyers, much as in the health sector doctors did “not exclusively run health ministries, hospitals and supervisory bodies”.

The report went on: “The exclusivity of lawyers is unparalleled and contributes to an inward-looking sector that does not innovate.

“This ‘guild’-like system is determined by rules and a culture that make it hugely difficult to participate if you are not from that closed group.”

Instead, it advocated that justice systems should be run by others: “Psychologists, social scientists, data analysts, designers, neurologists, social workers, public and business administrators, and critically users – must be let in.”

The taskforce called lawyers dominating the direction of justice the “robe model”, which lawyers worldwide and governments had to recognise was “at the end of its life-cycle”.

“What attorneys, judges and prosecutors do, the procedures they follow when solving disputes or coping with crimes, yes even what young lawyers have to learn at university, all this has been laid down in precise rules…

“These rules are predominantly only made by the legal profession itself. This works like a powerful closed community, stifling innovation, keeping out technology, complicating informal justice in communities and evidence-based conflict resolution.”

Less qualified and regulated paralegal “accessible justice helpers” close to the communities where they worked, could be one solution to closing the justice gap, possibly paid for by legal insurance schemes, the authors said.

Improved contracts might also be a way of creating the necessary scale to effect global change, they suggested.

They highlighted the work of LegalZoom – which bought Wakefield firm Beaumont Legal in the UK – which they said research showed had helped to lower the average price of legal services by “increasing beneficial competition”.

They also highlighted various uses of data-driven technology in helping resolve disputes more cheaply, for instance in China: “For civil and criminal matters, the Shanghai High Court has led the way, offering AI bot-based legal advice via WeChat, one of China’s most popular social media platforms.”

They stressed that innovations in the justice sector required what they called an “ecosystem” that allowed experimentation and failure, with the support of “ministries of justice, councils of judiciaries, law societies, bar associations, and universities”.

Also, they recommended legal education had to change radically to engineer a break with the past: “As long as law schools teach lawyers what they have taught them in the past, most lawyers will continue to do what they do…

The curriculum needs to be adapted to include training in skills that will allow lawyers to work more evidence based and data-driven.

“In addition, the system change that is needed will require a lot of justice entrepreneurship, which can be taught.”

In relation to regulation, they said the Legal Services Act shift from a focus on regulating people to regulating services, “which could be provided by a host of innovative people and businesses”, meant the regime had the flexibility to accommodate new models.

“Moreover, it fosters responsible competition to help drive costs down and quality and accessibility up. It is an inspirational model that deserves to be followed and developed further.”