Lawyers for XR to perform “arrestable action” outside Law Society 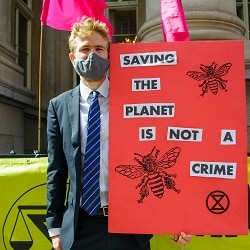 Lawyers for XR: A protestor outside the Law Society on Wednesday

Lawyers for Extinction Rebellion (XR) will perform a “theatrical and arrestable action” outside the Law Society today in a bid to push the of the Solicitors Regulation Authority (SRA) “to confirm or deny lawyers’ rights to engage in peaceful non-violent protest, without fear of losing their right to practise”.

It follows protests outside the Law Society, SRA and Bar Council on Wednesday to demand they treat the climate and ecological crises “with the urgency they require”.

Lawyers for XR is a collective of lawyers “who acknowledge the climate breakdown and ecological crisis and recognise the powerful role of law in bringing about necessary system change”.

Letters handed in to each body featured a series of demands, including that they “declare a climate and ecological emergency” (CEE), implement “rigorous sustainability goals” in their daily operations and activities, and adopt a green code of conduct.

This would guide lawyers on their role in addressing the climate change challenges in their professional practice “by taking a CEE conscious approach to delivering legal services to their clients”.

They also called for confirmation that participating in peaceful protest would not result in repercussions.

The SRA letter argued that, in assessing the character and suitability of lawyers who were climate activists and have been arrested or convicted for non-violent civil disobedience, the exercise of its discretion “must be informed” by the CEE.

In this context, Lawyers for XR said the SRA character and suitability rule which considered more than one conviction indicative of ‘most serious’ criminal conduct leading to disqualification was “inequitable and should be revised”.

They said: “Lawyers convicted of more than one public order offence during their continuing engagement in peaceful climate activism must not lose their jobs (or right to practise) and livelihoods for taking necessary action to avert the climate breakdown and ecological catastrophe.” 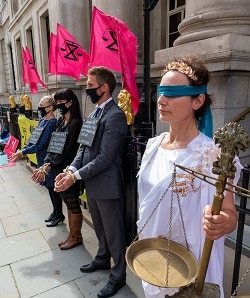 Lawyers for XR protest outside the Law Society

A spokesman for the Bar Standards Board added: “We would not expect to take enforcement action against a barrister based solely on the fact that they have engaged in lawful, peaceful protest.

“If we receive complaints or information to suggest that a barrister has breached our core duties or rules, we will investigate in the normal way and whether or not behaviour constitutes a breach will depend on the facts of the individual case.”

The events are taking place as part of the Extinction Rebellion UK Rebellion since 28 August, which saw XR champion the Climate and Ecological Emergency Bill being tabled in Parliament by Caroline Lucas MP.

Lawyers for XR noted that the British Medical Association declared a climate emergency in July 2019, pledging to use their standing to influence government policy, and said the Law Society and Bar Council should no longer stay largely silent on the issue.

Law Society president Simon Davis said it recognised that climate change “is a serious challenge and concern for the planet, the public and the profession”.

He added that the society was an active member of the Legal Sustainability Alliance, a UK network of 180 law firms which helps solicitors to reduce their own carbon emissions and to work with clients and colleagues to make a difference.

It also supports the Chancery Lane Project, which last year produced guidance on how to make the UK’s laws and contracts fit with the needs of the planet.

She said: “There is no question that climate change is a crucial issue and the Bar Council is already looking at what more it can do to help the profession address the impact of climate change more effectively.

“The Bar Council, along with other legal professional bodies, has been proactive in highlighting the seriousness of the problem and the role the law can play in protecting our planet, as seen from Justice Week 2020, for which we produced a series of short films focusing on environmental law.

“We also promote environmental responsibility to chambers and are already looking at further projects we can pursue in this area… I look forward to discussing these challenges with Lawyers for Extinction Rebellion.”

Last year, the group signed a ‘Lawyers’ Declaration of Rebellion’ outside the Royal Courts of Justice, and earlier this year held a protest outside City firm Slaughter and May for its work with fossil fuel companies.