Lawyers “confused by boundaries in wake of #MeToo” 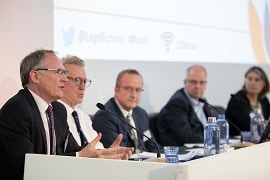 Lawyers and regulators are uncertain where the boundaries lie on misconduct in the wake of the #MeToo revelations, experts have warned.

Patricia Robertson QC of Fountain Court Chambers, a former vice-chair of the Bar Standards Board, said lawyers faced further challenges as the gap widened between the standards expected from them and from ordinary members of the public.

Ms Robertson told a panel session at last week’s Legal Futures Regulation and Compliance Conference that “change was forced on the profession” in terms of sexual ethics because it was “trailing behind” other parts of society.

“Unacceptable behaviour is being outed in ways that simply wouldn’t have happened a number of years ago.

“It’s not that there are more sexual predators now than there were once upon a time, but there are big challenges. What are the boundaries for the regulators here? What is private and personal? Are we saying there should not be relationships in the workplace? What are we saying?”

Regulatory specialist Iain Miller, partner at Kingsley Napley, said what was considered to be misconduct by lawyers had “morphed slightly” in the wake of #MeToo and agreed that there was “confusion as to where the boundaries lie”.

Ms Robertson said the profession was now living “in the era of Trump and post-truth”, and she had been shocked a few years ago that a contestant on The Apprentice had not been thrown off the TV programme despite having been found to have faked his CV.

“I was left reflecting on the difficulties of a regulator trying to regulate a profession held to higher standards than the rest of society in circumstances where that gap is widening in terms of perceptions of integrity and what good looks like.

“Lawyers are expected to behave better, but we know that peer groups can produce toxic subcultures – think Enron.”

Ms Robertson went on: “Take the concept of lawyers as people under fiduciary duties – putting others before yourself. How do you inculcate altruism? Are we building law firm cultures that make it difficult to encourage and sustain altruistic behaviour? If the reward system in your firm is ‘eat what you kill’, are you going to breed good fiduciaries? That’s the kind of problem we should be thinking about.”

The QC said another issue was when lawyers should say no to clients. “When a law firm tells its keen, young applicants for training contracts that it is looking for ‘commercial awareness’, what does it mean? Is that a code for just doing what the client wants?”

Richard Moorhead, professor of law and professional ethics at UCL, said the idea of commercial awareness was “really important”, but lawyers he had spoken to described it as “in the grey zone” – not criminal but close to the line.

He said law students saw commercial awareness as “a kind of mantra, a kind of religion they need to start absorbing” and it was “a way of controlling and shaping behaviour” in ways which might be positive but could also be quite harmful.

Professor Moorhead said there was “definitely a culture of greater scrutiny” of lawyers by regulators, Parliament and the press, which was “much less respectful” than before.

However, there was very little ethical training, whether at law schools, on the legal practice courses or in firms, with the result that many lawyers did not understand the rules or principles that regulated them.

Looking back on his training, the academic said many of his fellow trainees thought the best thing to do was to copy the partner they were working for, rather than consider what was the right way to be a lawyer.

“The way lawyers learn to be lawyers is through emulation, rather than critical reflective practice. That culture of emulation needs to be challenged and changed.”

Simon Davis, vice-president of the Law Society, said solicitors had always been under pressure to act unethically, “particularly in the conduct of litigation”, where the clients often “hate” their opponents and want their lawyer to “pull every possible trick to win”.

In the context of cross-border litigation, he said clients from outside England and Wales were often shocked to find that witnesses could not be rehearsed and that vital documents had to be given to the other side.

“The situation now is not so much that solicitors are under greater pressure to act unethically, but the situations in which they are required to act are increasingly complex.”

Mr Davis said commercial awareness meant the conduct of law was not “some kind of theorising”, with clients left to make up their own minds.

“Commercial awareness means that the advice you’re giving to the client has to be relevant and useful to the client.”

He said commercial awareness also meant understanding that “law does not exist in a vacuum” and he could see from looking at the CVs of trainees that they were aware of that.

Ed Nally, president of the Solicitors Disciplinary Tribunal, added that it was “nonsensical” to believe that the modern professional was not as ethical, caring and thoughtful as in the past.

However, the modes of practice, the competition, types of law firm and nature of guidance from the Solicitors Regulation Authority had changed with “incredible speed”.