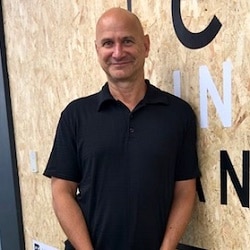 Next year will be the tipping point for law firms’ adoption of new technology, one of the first residents of a major lawtech incubator has predicted.

The ‘Eagle Lab’ in West London was announced in April and sees a host of leading law firms, the Law Society and universities teaming up with Barclays Bank to create a centre of excellence.

It provides co-working space and support for up to 100 individuals, with access to mentoring and workshops. The first residents are:

Legal Futures spoke in depth to ayfie, which claims it can offer a more “holistic” service than any other AI tool.

The company was founded in Norway in 2009, before acquiring a German NLP specialist in 2015.

Peter Richards, senior vice-president of business development EMEA, said the company had been focusing on the European and American legal market for the past three years, while continuing to work in the financial and medical sectors.

He said the advantages of using NLP, rather than machine learning, was that law firms would not have to spend time and money training algorithms, and that the results were more detailed and more accurate.

“We’re not against machine learning, in fact we use it for some tasks, but the information extracted by NLP is more granular and more accurate.

“Law firms don’t have to hire someone to train algorithms, or prepare and annotate 200 documents to use in the training process.”

Mr Richards said NLP could extract information from “any of the data sets” used by law firms, whether the text was contained in emails, email attachments, instant messaging or purely internal documents.

“This makes us much more comprehensive than any other tool on the market,” he said. “Firms can manage their internal knowledge with one tool, instead of several pieces of software. It provides them with more holistic data management.”

Mr Richards said he preferred the term “aided” rather than “artificial” intelligence.

“There’s nothing artificial about what we do,” he said. “We’re not replacing humans.

“I would compare ayfie to a computer speed-reader. It can extract insights from a million documents. It’s about getting more precise information to lawyers faster.”

Mr Richards said ayfie had around 25 employees at its HQ in Oslo, 35 at its technology centre in Munich, and around 20 in its American offices in New York, Washington and San Francisco.

He said ayfie began as a technology company, operating as a search specialist and creating knowledge management systems for large corporations.

It went on to license its technology to a number of e-discovery companies, before deciding 18 months ago to offer its products directly to law firms.

Mr Richards said the immediate priority was to recruit two or three clients In London this autumn.

“We’re like a warm start-up. We have funding, we have customers and we have revenue, but we still act like a start-up.”

Mr Richards said he believed 2019 could a “tipping point” for the legal sector, with an experimental phase giving way to “focused adoption” of new technology.

“We will know much more about what law firms want and how they want us to help them.”

He said ayfie had been chosen by Norway’s largest law firm BAHR to “collect and store knowledge from all of its cases”, acting as a kind of “digital library”.

Outside the legal sector, ayfie is active in financial services, particularly in extracting data from mortgage documents, the medical world, for example by helping predict outbreaks of infectious diseases, and in compliance by helping companies comply with GDPR.

Mr Richards described the Eagle Lab a “diverse place”, where legal tech companies could benefit from law firms visiting every day and the ability to take a “more objective” approach than the legal tech accelerators set up by individual law firms.

Stephanie Pagni, general counsel for Barclays UK, who has played a key role in developing the initiative, said: “Now that the first residents have moved into our LawTech Eagle Lab, we look forward to working with our partners to facilitate supporting their growth by providing them with an environment in which they are able to collaborate and learn fast.

“We believe our residents offer the prospect of exciting solutions to improve a wide range of working practices in the legal sector.”