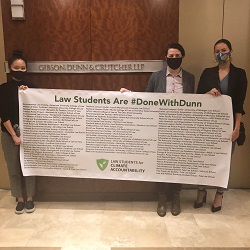 Law students are signing a pledge to boycott a leading US law firm because of its work “shielding corporate polluters from climate accountability”.

The pledge has been created by US-based Law Students for Climate Accountability (LSCA), a group which produces an annual scorecard marking the leading law firms over the extent to which their work contributes to climate change.

In April, the LSCA sent an open letter to Gibson Dunn & Crutcher expressing its concern about what it said was the firm’s “record of furthering climate change and environmental injustice”.

The firm’s highest-profile work in this area has been representing oil company Chevron in a long-running battle over claims that it was responsible for toxic contamination in Ecuador, which the company strenuously denies.

The letter, signed by 87 student law groups from dozens of US law schools, including the likes of Harvard and Yale, called on Gibson Dunn to commit to a publicly available ethical standard “that articulates what fossil fuel work is incompatible with their commitments to frontline communities and to the climate”.

The students said they were left to wonder “if there is any case Gibson Dunn would not take on”.

In the statement yesterday pushing the hashtag #donewithdunn, the LSCA said there had been no response to the letter.

It went on: “As the newest generation to enter the legal profession, we refuse to be a part of Gibson Dunn’s work undermining access to justice, particularly for Indigenous communities.

“And we refuse to contribute to a firm that is doing so much to exacerbate a climate crisis that threatens every one of us with an unliveable future.”

The students acknowledged that the average Gibson Dunn lawyer spent 6% of their billable hours on pro bono work but said this “shouldn’t get it off the hook”.